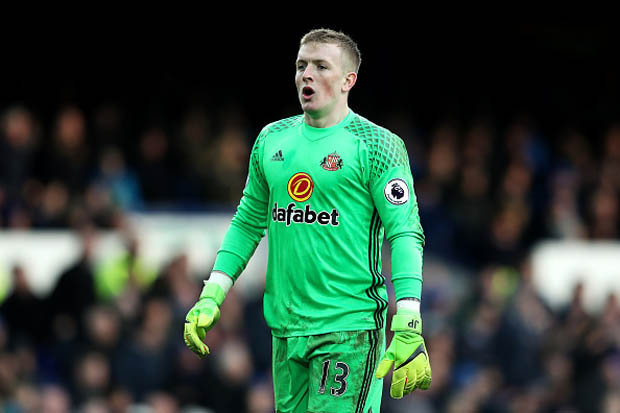 Arsenal are one of the four clubs interested in signing Sunderland goalkeeper Jordan Pickford, according to the Daily Star.

The Gunners have been linked with a host of goalkeepers in recent weeks. Arsenal are reportedly planning for the future despite the uncertainty surrounding Wenger’s future.

And Pickford who is one of the Premier League’s best young goalkeepers is on Arsenal’s radar.

The 22-year-old shot-stopper is likely to leave the Stadium of light this summer if Sunderland doesn’t survive relegation and Arsenal along with three other Premier League clubs are waiting on the wings to snap him up.

Everton, Manchester City, Arsenal and Chelsea are the four clubs interested in the goalkeeper.

Ronald Koeman is in search of a young goalkeeper to replace his ageing Maarten Stekelenburg and he is keen to sign Pickford.

Manchester City have faced goalkeeping troubles this season after Bravo failed to adapt to the demands of the Premier League and the Etihad side sees the Sunderland man as a perfect option to replace their current number one.

Chelsea have also watched the goalkeeper in action despite having one of the best young goalkeepers in Thibaut Courtois but with the Belgian continuously attracting interest from Real Madrid, the Blues could step up their interest in Pickford as a replacement.

Arsenal scouts watched Pickford in January and the decision makers at the Emirates believe the goalie would be a great investment for the future.

These four clubs could go head to head for the lad in the summer and it promises to be an interesting transfer battle.

I for one would love Pickford to join Arsenal but the presence of Cech would make it difficult for us to sign him. However, we could sign the Sunderland man and make use of the loan market until Cech is ready to hand his gloves, that way, it’s a win-win situation for everyone.