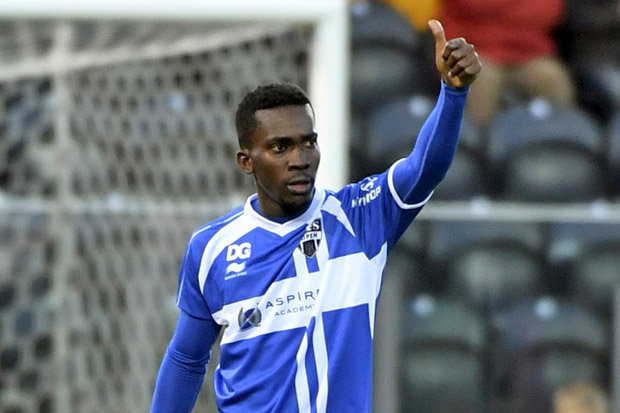 According to reports, Arsenal have open talks with Nigerian youngster Henry Onyekuru who plays for Belgian side KAS Eupen

Goonersden.com believes Arsenal are in talks with KAS Eupen over a potential £6.8m deal to sign the Everton and Southampton target this summer.

With the future’s of Alexis Sanchez and Lucas Perez in serious doubt, Arsenal are expected to sign at least one new forward this summer and it looks as though Wenger is already making moves in the market with the Nigerian international believed to be one of his key targets this summer.

Onyekuru scored 20 goals in the Belgian League this season making him the highest goal scorer.

His impressive performance has earned his first international call-up for his national side.

Although he was not in the 25-man squad earlier released by Rohr for the friendly games but got called up to replace Kayode Olanrewaju.

His goalkeeper teammate, Hendrik Van Crombrugge, was also celebrated by Eupen on his invitation by Belgium coach Roberto Martinez.

A statement on Eupen’s official website on Tuesday reads: “The performances of two KAS Eupen players have attracted the attention of national team coaches.

“For the first time in his career, KAS forward Henry Onyekuru has been called up for the Nigerian national squad, while KAS goalkeeper Hendrik Van Crombrugge has been short-listed for the second time for two internationals for Belgian.

“For Henry Onyekuru the 2017-2018 season continues, despite having played the last match in the Jupiler Pro League and taking part in the gala event celebrating Belgium’s footballer of the year.

“Called up for the first time as a member of the Nigerian national squad, the 19-year-old KAS Eupen forward flew off to Corsica on Tuesday where the Super Eagles are holding their training camp. Nigeria will be playing a friendly against a Corsican selection on the island next Friday evening, before moving on to Paris for a further friendly in Paris, this time against Togo.”