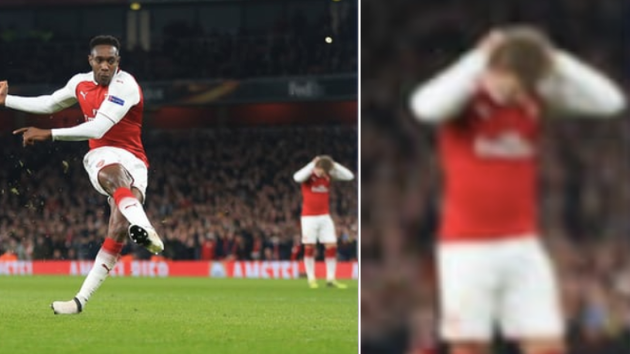 England International Danny Welbeck found himself on the scoresheet twice on Thursday night in the Europa Cup.

The Gunners won 3-1 in aggregate ( 5-1 ), but there was one some questionable diving leading to Danny Welbeck second goal.

The referee controversially gave the spot kick after the 27-year-old flung himself down like he was competing for gold in the 2020 Olympics.

Welbeck proceeded to slot away the penalty with ease, but one Arsenal teammate couldn’t even bring himself to watch the spot kick as he looked down at the ground, head in hands.

That’s right. Nacho Monreal was spotted clutching his head just seconds before the striker stepped up the spot. Does this indicate that he didn’t have much faith in Welbeck’s ability to convert?

Either way, it definitely got people talking on social media.

Arsenal eventually went on to win the game comfortably on aggregate, but this moment, in particular, was the biggest talking point throughout the game as Gennaro Gattuso paced on the touchline.

To be honest, we’re quite surprised the Italian didn’t lose his cool after Welbeck’s dive and after the game, he defended the England international for his actions.