Arsenal manager Unai Emery is certain to make changes to his starting XI when the Gunners face Manchester United on Monday night (8pm).

The full-back duo have been sidelined since the start of the season but have been completing similar rehabilitation programs and made their first appearances of the campaign in the Carabao Cup third round tie against Nottingham Forest on Tuesday.

Tierney made his Gunners debut in the 5-0 victory at the Emirates, having recovered from a double hernia operation during the summer, while Bellerin replaced the Scot after 77 minutes.

The Spanish defender had not featured for Arsenal since suffering an ACL injury against Chelsea in January and received a huge ovation upon his introduction.

However, Unai Emery has already ruled Bellerin out of featuring against United next week and suggested the 24-year-old could benefit from some minutes with the U23s

Therefore, Ainsley Maitland-Niles is favourite to start at right-back following his suspension but Calum Chambers is also in contention after his display against Forest.

Sokratis Papastathopoulos and David Luiz are likely to line up in central defence but Shkodran Mustafi is another option while Rob Holding made his first appearance since December on Tuesday.

Bernd Leno will return in goal while Emery must decide whether to hand Tierney a Premier League debut or recall Sead Kolasinac on the left side of defence. 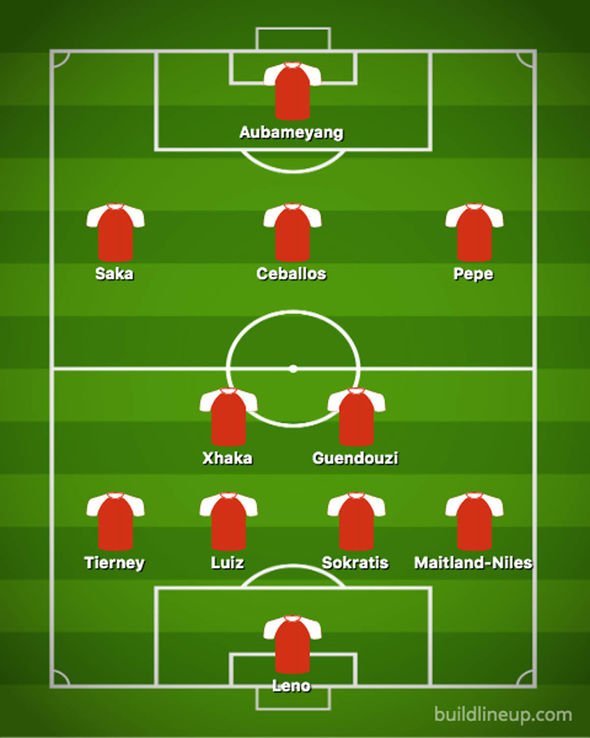 Granit Xhaka has been named as Arsenal’s permanent captain and will return in central midfield alongside Matteo Guendozui with Lucas Torreira and Joe Willock dropping to the bench.

Mesut Ozil is also likely to miss out while Reiss Nelson and Gabriel Martinelli should make way for Dani Ceballos and the impressive Bukayo Saka.

Emile Smith Rowe was substituted at half-time against Forest as a precaution after a collision but was expected to lose his place on the right flank to Nicolas Pepe.

Finally, Alexandre Lacazette remains sidelined with an ankle injury and is not expected back in action until October so Pierre-Emerick Aubameyang will lead the line.