Back on December 16th, Gazzetta dello Sport claimed Napoli had made an offer for Lucas Torreira, who isn’t having the best of times at Arsenal this season.

The Serie A side decided to try their luck with an 18 month loan, paying €3m up front with a mandatory purchase fee of €27m included.

At the time, Arsenal had yet to reply, and Napoli were waiting to find out what the answer coming out of London would be.

Well, fast forward to four days later and there’s still not been much noise coming out of the Emirates, even if it is claimed by Gazzetta dello Sport that the Gunners ‘aren’t enthusiastic about the numbers’.

However, they haven’t turned down the offer just yet as they are ‘waiting for the player to say something’, as he is currently wanting to know more about the project being worked on in Naples under Gennaro Gattuso and what direction it will be taking. 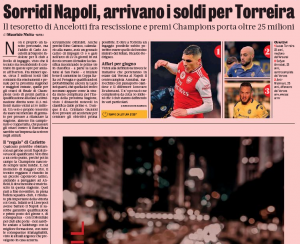 Basically, as Gazzetta put it, we are some way off an agreement here, but the possibility of a deal remains open, leaving Napoli ‘discreetly optimistic’.

They just have to convince Torreira that a move to Naples would be in his best interests in January.