Linked with a move away from the Emirates for the past few weeks, Lucas Torreira’s next destination looks like it could be Napoli, but that depends on many factors

Firstly, we have to wait and see what the next Arsenal manager (widely expected to be Mikel Arteta) plans on doing with the Uruguayan.

Then, if he doesn’t want Torreira around, the club then have to work out how much they want for him, which, unfortunately for Napoli, is expected to be a lot.

That’s what Il Mattino are reporting on Thursday, claiming the Serie A side aren’t interested in going above €30m to bring him back to Italy, while the Gunners want more. 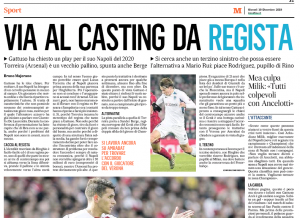 The newspaper explain that talks ‘are destined to continue for a few weeks, at least until the end of December, but not beyond’.

The reason for this is that Gennaro Gattuso wants recruits as soon as possible, wanting to build his Napoli side from the start of January onwards.