Arsenal moved up to 10th in the Premier League with an emphatic 4-0 win over Newcastle. The victory was the Gunners’ first in five Premier League matches and sees them edge to within seven points of the top four.

The Ivorian then got on the scoresheet himself when he swept home Bukayo Saka’s pull-back three minutes later and Mesut Ozil made the game safe with a bundled finish in the closing stages.

There was still time for substitute Alexandre Lacazette to break his nine-goal drought with a mistimed finish to put some gloss on Arsenal’s first league victory since New Year’s Day.

Express Sport have rated how the Arsenal players performed against Newcastle, but do you agree?

Alert to push away Sean Longstaff’s drive after it deflected off the head of Dani Ceballos.

Showed solid handling and was a calming presence at the back, although he was nowhere near Allan Saint-Maximin’s effort that clattered the post.

Offered Arsenal width down the right but his delivery was often below-par.

Did create space for Pepe to drive inside but was put in the shade by Saka on the other flank.

Solid and sensible in possession without taking any risks, and dealt effectively with Joelinton.

Enjoyed plenty of possession as Newcastle failed to press the ball, and his range of passing helped stretch the Magpies.

A brilliant display from the makeshift left-back, who continues to perform admirably in defence and intelligently in attack.

Went close with a couple of curling efforts before playing a key role in the second goal by nutmegging Valentino Lazaro and delivering for Pepe.

Really bright showing from the Spaniard on his first start since Arteta took over.

Buzzed around looking to get on the ball at every opportunity and tested the Newcastle defence with probing passes before playing a key role in the buildup to Eddie Nketiah’s strike against the bar.

Went in the book early for a cynical shirt pull but was quietly effective at snuffing out danger.

Subdued opening spell but perked up just before the break, forcing Martin Dubravka to tip a free-kick over the bar.

Set up Nketiah to strike against the bar before picking out Aubameyang for the opener with a delightful delivery.

Then got on the scoresheet himself when he swept home Saka’s pull-back before assisting Lacazette as the Frenchman ended his goal drought.

Struggled to find space between the lines against a compact Newcastle outfit, although he played a couple of enticing balls in the lead up to half-time.

The German kept driving forward with the ball and helped wear down the opposition defence, and was rewarded late on when his weak effort was bundled in by Dubravka.

Looked frustrated out on the left, although there was on bright moment when he drove in off the line and worked Dubravka.

Then ghosted in at the back post to head home the opener and hit the bar with a chipped cross but will hope to be deployed centrally going forward.

An industrious display from the youngster, who was looking to justify his selection ahead of Alexandre Lacazette.

Hit the bar when he should have hit the target but few other chances of note. 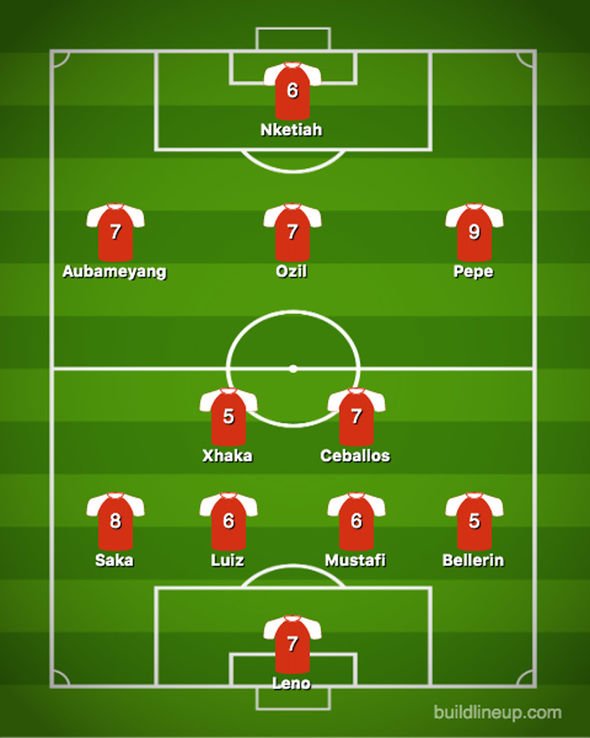 Helped close the game out.

Late cameo as he scored his first goal since December, albeit via a botched finish.

Involved in the build-up for the fourth.