With the chance for Mikel Arteta’s side to go clear at the top of their Europa League group, let’s take a look at our Arsenal predicted lineup for Molde FK.

After a rare Premier League win away at Old Trafford on Sunday, Arsenal return to the Europa League for a top-of-the-group clash against Molde on Thursday.

Both teams won their first two games against Rapid Wien and Dundalk. Arsenal technically have the goal difference advantage, but it doesn’t matter, because Europa League groups are decided on head-to-head record when the points are level.

That includes away goals, so Arsenal need to make sure they get a win and a clean sheet on Thursday. However, Arteta is likely to rotate, with Premier League games either side. Let’s take a look at our Arsenal predicted lineup for Molde.

Rúnar Alex Rúnarsson had a very comfortable debut against Dundalk last week, which might encourage Arteta to give him another chance this Thursday.

Alternatively, we’ve already seen the Arsenal manager is willing to use Bernd Leno in this competition, and this is a match against the team’s top rivals in the group right now.

It could go either way, but I think Arteta will want to keep settling Rúnarsson in on the pitch. After all, you never know when your backup goalkeeper might need to step up and start the big games too.

Once again, Arsenal’s defence is going to be a bit cobbled together. Despite Rob Holding’s return to fitness over the weekend, the Gunners still only have three centre-backs until Pablo Mari, David Luiz and Calum Chambers return to fitness.

That’s in addition to the fact they’re missing Sokratis Papastathopoulos and William Saliba, as neither could fit in the Europa League squad.

Gabriel Magalhaes, Shkodran Mustafi and Rob Holding are the three available, but Gabriel and Holding started at the weekend and will probably start against Aston Villa too.

So Mustafi is a nailed-on starter, and Granit Xhaka will probably drop back to partner him. Sead Kolasinac will fill the left-back/left-centre-back role, whilst Cedric Soares takes the right-back/right-wing-back position in Arteta’s hybrid 4-3-3/3-4-3 formation.

Thomas Partey and Mohamed Elneny played excellently against Manchester United, but Elneny will surely get a rest after two games in the last few days.

Ainsley Maitland-Niles can come in to play on the left of the three, shifting across to wing-back when necessary. Joe Willock deserves another start after his performance last week. Dani Ceballos also needs a game at the moment after his recent injury.

With Xhaka in defence, there aren’t too many other options. If Emile Smith Rowe is back, he could feature, but the fact he hasn’t made a squad with the first team or the u23s in the last week or so suggests his best bet is a spot on the bench right now.

Most likely, Arteta gives another game to the same trio that started last week. Nicolas Pepe, Reiss Nelson and Eddie Nketiah all dropped out of the starting lineup at the weekend, with only Nketiah coming off the bench against Manchester United.

The three of them also played well against Dundalk, so they’re not just in the team to rest the alternatives. They’ll genuinely be needed to get another win on Thursday.

Just in case, I’d expect Pierre-Emerick Aubameyang, Alexandre Lacazette and Willian to make the bench. But hopefully, Folarin Balogun is the more likely player to come on. 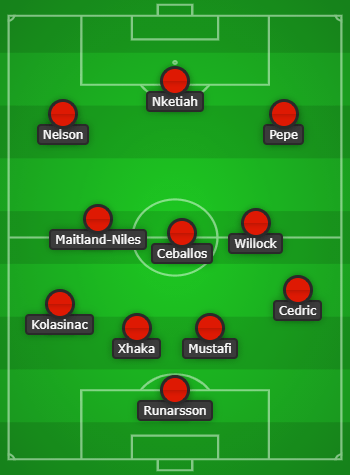