Mikel Arteta’s side return from the international break with a trip to Elland Road, so here’s our Arsenal predicted lineup vs Leeds United.

Arsenal lost in embarrassing fashion at home to Aston Villa before the international break, so they need to get back to winning ways and put in a much better performance away to Leeds United next.

Ideally, Mikel Arteta needs to look at his system and make alterations, because we’ve had too many games in a row struggling to overcome the same offensive deficiencies. Whether that’s likely or not, we’ll see.

Bernd Leno will start. Runar Alex Runarsson got a game against Dundalk recently, and he made a decent save from the only shot on target, but Arteta is making it clear Leno will start every game until he needs another rest.

Kieran Tierney and Gabriel Magalhaes are likely to start, as usual. Villa heavily targeted Rob Holding in the last match, so I’d argue Arteta will look to find an alternative solution at right-centre-back.

Shkodran Mustafi didn’t return well against Leicester City, and after a so-so Molde performance, he dropped out of the squad completely against Villa. David Luiz is the most likely remaining option.

The big question here is whether Thomas Partey will be fit. At this stage, we just don’t know. It’s safer to assume he’ll miss out while the situation is unclear, so we’re predicting Granit Xhaka and Dani Ceballos to start instead.

With Partey potentially out and Mohamed Elneny failing to follow up his Old Trafford performance with a positive display against Aston Villa, Arteta will probably look to fall back on a proven pairing.

Xhaka and Ceballos ended last season playing together, so they have experience.

Bukayo Saka should start on the left in the left-central-midfield/left-wing-back role.

Don’t shoot the messenger, but I’m expecting exactly the same front three as in our recent Premier League matches. The fact Arteta has stood firm for so many games suggests he believes it will eventually come good, despite the lack of evidence for that.

So that’s Pierre-Emerick Aubameyang out of position on the left, Alexandre Lacazette hoping to avoid making it seven games without a goal or assist up front, and Willian looking to end his run of nine appearances without a goal contribution on the right.

Nicolas Pepe, Reiss Nelson, and Eddie Nketiah will have to settle for places on the bench. 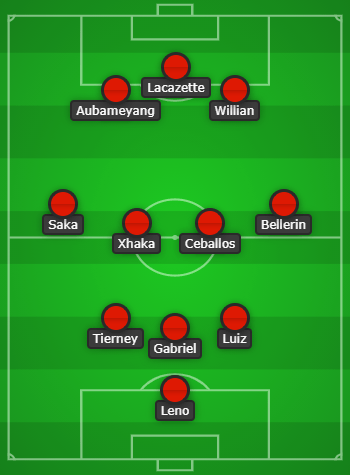