After returning to winning ways in the Europa League, here’s our Arsenal predicted lineup for Wolves back in the Premier League.

Arsenal beat Molde 3-0 away from home to all-but-ensure winning their Europa League group on Thursday. A point from their final two games would guarantee top spot, and even losing both games could be enough in certain circumstances.

In the meantime, they return to the Premier League pushing to even make it back into the top half of the table. Four wins, one draw and four defeats have Mikel Arteta’s side languishing down in 12th place.

Arteta will want to go as strong as possible, knowing there’s no real reason to hold anyone back for next Thursday anymore. Let’s take a look at our Arsenal predicted lineup for Wolves.

Runar Alex Runarsson kept another clean sheet in the Europa League on Thursday, but Bernd Leno presumably remains the first choice in the Premier League. The German goalkeeper had a great game against Leeds United last weekend.

There aren’t really too many options in defence at the moment. David Luiz became the latest player to pick up an injury on Thursday, and Calum Chambers and Pablo Mari don’t seem ready to return just yet.

Then there’s Sead Kolasinac’s coronavirus case at left-back, Sokratis Papastathopoulos’ exclusion from the Premier League squad, and most of the rest started on Thursday.

As a result, it’s hard to see past Kieran Tierney, Gabriel Magalhaes, Rob Holding and Hector Bellerin in the back four.

We’re going to assume Arteta sticks with the same system he used against Molde on Thursday. He needed to change something after the last few weeks of football, and it seemed to work pretty well in midweek.

That means two central midfielders and two wide players. Granit Xhaka and Dani Ceballos are the obvious candidates in the middle with Thomas Partey and Mohamed Elneny out, although Joe Willock and Emile Smith Rowe are knocking on the door right now.

Nicolas Pepe is unavailable, but Reiss Nelson isn’t, and he’s in great form at the moment. Opposite him, it depends on who is fit.

If Bukayo Saka makes it back in time, he could play on the left (or the right) with Nelson on the other side. If Willian is fit, he could play the position instead. Both are still doubts for the game at this point, but Saka seems the more likely to return.

Again, assuming Arteta sticks with the system he used on Thursday, Arsenal will be playing with two up front. Pierre-Emerick Aubameyang will surely come back in as one of them, and I’d bet on Alexandre Lacazette as the other.

Eddie Nketiah will drop to the bench, and Folarin Balogun will probably wait until next Thursday for his next opportunity. 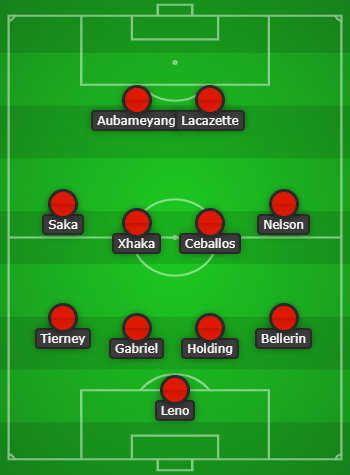