Aiming to top the group with a draw or a win on Thursday, let’s take a look at our Arsenal predicted lineup vs Rapid Vienna.

As shockingly poorly as Arsenal are playing in the Premier League, they’re breezing through their Europa League group at the moment.

A draw or a win would see Arsenal confirming top spot on Thursday night, but even a 1-0 defeat would be enough to confirm their position mathematically. If the Gunners lose by more than that, they can still take top spot with a draw against Dundalk afterwards.

Unlike in the league, the pressure is off in this competition. At this point, it’s more about lifting spirits and getting the job done, particularly as this will be the first game with fans in the stands since March. Here’s our Arsenal predicted lineup vs Rapid Vienna.

Runar Alex Runarsson got a chance in the last game against Molde, and there’s no real reason not to give him another one here. He needs games to settle in and these two group stage games are basically free hits. Bernd Leno should drop to the bench.

Calum Chambers and Pablo Mari are both on the verge of returning to first-team action, but it’s hard to say when they’ll actually get a chance to start. David Luiz and Shkodran Mustafi are probably the safer bets, assuming Luiz continues to pass the medical tests after his head injury. Cedric Soares should come in at right-back.

I can’t explain why Arteta is playing Willock in the 10 role in the Premier League when the midfielder is performing so much better in a deeper position in the Europa League.

The young midfielder should drop back alongside Granit Xhaka, as they were so successfully in the last match against Molde.

Alexandre Lacazette started ahead of them in that Molde clash, but I have a feeling Arteta might save him for the North London derby. Emile Smith Rowe is back and earning a start for the first-team, so this seems like the perfect opportunity for him.

Performing so well against Molde to begin to make amends for his red card against Leeds United, Nicolas Pepe should come back into the team for this one. He can’t play in the Premier League due to suspension, so this is the only way to get him games.

Reiss Nelson and Eddie Nketiah will presumably complete the front three, given neither started against Wolves at the weekend. Willian and Pierre-Emerick Aubameyang should get rests. 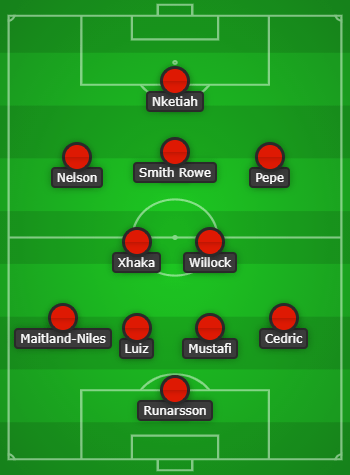