Sunday brings the first North London derby since the return of fans, let’s take a look at our predicted Arsenal lineup vs Spurs.

Arsenal desperately need to put some Premier League results together at the moment, but never more so than this weekend, facing Tottenham Hotspur.

It’s not just a derby this time, it’s the chance to cut the gap to five points or end the day 11 behind Spurs as league leaders, a sickening thought. Here’s our predicted Arsenal lineup vs Spurs.

Bernd Leno will return to the team again. Runar Alex Runarsson is doing a good job in the Europa League games, only conceding once in three games and playing out from the back well, but he hasn’t really been tested.

Barring a late fitness concern or illness, I can’t see any way Arteta starts anyone except Leno.

The back four is also fairly straightforward. Kieran Tierney and Hector Bellerin are nailed-on starters in the full-back positions, with Gabriel Magalhaes a clear choice at centre-back.

Assuming David Luiz is ready to return after the cut to his head, he should start alongside Gabriel. If not, Rob Holding is the most likely option.

It was great to see Pablo Mari and Calum Chambers back in the first team on Thursday, but they won’t start two games in such quick succession after injury. It wouldn’t be wise to start Shkodran Mustafi either, after his performance in the last NLD.

If Arteta is going to have any success with his team in this match, you feel it’s going to be by building on the system they used on Thursday.

With Alexandre Lacazette playing behind the striker and Ainsley Maitland-Niles supporting him, the team were a lot more effective in creating chances. Mohamed Elneny sat at the base of midfield shielding the defence and building play from the back.

I get the feeling Lacazette might keep his place, but the other two midfielders will change. Granit Xhaka is the most likely to play at the base of midfield, with Joe Willock a strong candidate for Maitland-Niles’ role. Neither played at all on Thursday.

If Thomas Partey is fit to start, that changes everything. He’ll certainly make the lineup if he is. But right now, it seems like a squad role is the safest bet for him.

With Nicolas Pepe out and Reiss Nelson playing an hour on Thursday, I feel we’re likely to see Willian starting. The former Chelsea winger has a lot of experience of derbies against Spurs, and I think Arteta will opt for that.

Bukayo Saka should return to the team on the other side, as a direct replacement for the role Pepe played against Rapid Vienna. Pierre-Emerick Aubameyang will take over from Eddie Nketiah up front. 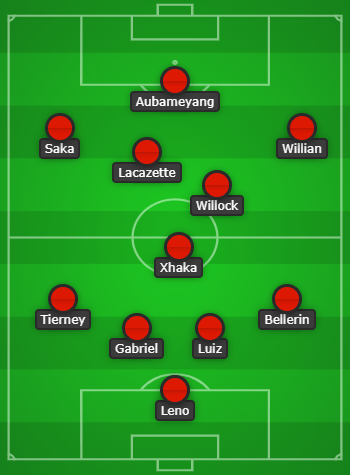