Taking a break from the league action for the EFL Cup quarter-final, let’s take a look at our predicted Arsenal lineup vs Manchester City.

There’s little to say about Arsenal’s league form at the moment that hasn’t already been said. Seven games without a win, home and away, scoring three goals in those games, there’s nothing good about it at all.

The League Cup quarter-finals are a welcome distraction, but facing Manchester City isn’t an appealing prospect – particularly given Pep Guardiola takes this competition so seriously. There’s no doubt he’ll be picking a team to win the match.

Mikel Arteta will have to pick a strong team of his own in response, with the caveat that his first-choice side just played on Saturday and face Chelsea next. Here’s our predicted Arsenal lineup vs Manchester City for Tuesday’s League Cup clash.

Normally, you might expect an alternate goalkeeper to come in for a League Cup game. However, it’s Manchester City and a quarter-final at a time where Arsenal need any lift they can get, so we expect Bernd Leno to keep his spot.

Gabriel Magalhaes had an enforced rest at the weekend due to suspension, so he should be ready to come back in alongside Kieran Tierney and Rob Holding.

Again, we expect Mikel Arteta to go strong for this one, rather than rotating. Besides, there aren’t too many alternate options available right now, with Pablo Mari and Calum Chambers seemingly still not quite at 100% after their long-term injuries.

If Arteta wants to be bold, he could give William Saliba a chance. He’s eligible and it’s probably worth the risk at this point. But we’re not going to predict that change, given the opportunities to include Saliba the manager has passed up so far.

With Granit Xhaka and Thomas Partey still out, Arsenal’s central midfield options are limited. Joe Willock can come in to give one of Dani Ceballos and Mohamed Elneny a break, but the other will probably still start. We’re predicting Willock and Elneny together.

Emile Smith Rowe is available, fit and a better option than most of the alternatives. But that’s been the case for a couple of weeks now and Arteta has still dropped him to the bench and refused to bring him on. We’ll believe he’s getting a start when we see it.

Bukayo Saka should keep his place on the left, with Hector Bellerin coming back in on the right. Cedric Soares is becoming the forgotten man at the moment, and Ainsley Maitland-Niles has just played the full 90 twice in four days.

The centre-forward position is becoming a bit of a revolving door, with Pierre-Emerick Aubameyang, Eddie Nketiah, Alexandre Lacazette, and Willian all trying their hands at it in the league with very limited success.

Aubameyang is currently injured, and Nketiah was the last player to get a chance, so Lacazette will probably come in for this one.

Reiss Nelson should be fit again, after returning to training in recent days. Willian has to drop out after his disappointing performance at the weekend, so Nelson is the obvious candidate to take his place.

With Saka in midfield/wing-back and Aubameyang out, that only really leaves Nicolas Pepe to start at right-wing. He also came off early against Everton, so he should be fit enough. Gabriel Martinelli is back, but probably not ready for a start just yet. 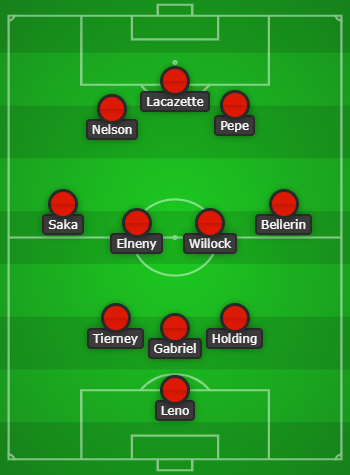