After finally putting together a few Premier League wins, let’s take our look at our Arsenal predicted lineup vs Newcastle United for their opening FA Cup clash.

Mikel Arteta’s Arsenal are finally putting a run together in domestic competition, beating Chelsea, Brighton, and West Bromwich Albion in consecutive Premier League matches. Next up, they’ll try to mount their defence of the FA Cup at home to Newcastle.

We’re expecting a few changes for this one, as Arteta tries to give chances to the fringe members of his squad. Arsenal have a busy schedule coming up, particularly if they remain in the FA Cup and Europa League, so this is a chance to hand out some rest days.

Newcastle are on a poor run in the league, dropping down to 15th, so they’re likely to rotate as well. They don’t really have the luxury of focusing on the early rounds of cup competitions right now.

With that all in mind, here’s our Arsenal predicted lineup vs Newcastle United.

We’re not going to completely rule out the possibility that Arteta selects Runar Alex Runarsson, as he did in the League Cup against Manchester City. However, it might be better to keep the backup goalkeeper out of the limelight after that performance.

In terms of fitness, Bernd Leno is perfectly capable of playing this game. There’s no real reason to take him out of the team other than to offer Runarsson a shot at redemption, which would be a gamble.

Gabriel Magalhaes should be available again, but if he is, Arteta is likely to want to save him for the following Premier League match against Crystal Palace. Instead, we’re predicting a start for David Luiz, who hasn’t made an appearance since his recent illness.

Shkodran Mustafi will probably feature alongside him, allowing Rob Holding to rest. Calum Chambers is also an option, after recovering from his ACL injury, but Mustafi has been making more squad appearances ahead of the Englishman recently.

Cedric Soares and Ainsley Maitland-Niles could both come in to play the full-back roles.

With Sead Kolasinac gone, there’s no obvious alternative to Kieran Tierney without dipping into the academy. Joel Lopez is having a good season, but he hasn’t featured in a squad under Arteta yet, so Maitland-Niles looks more likely to play this one.

Thomas Partey is seemingly back in contention for an appearance. This is a good game to bring him back with, at home against Premier League opposition to get him up to speed.

It would be good to give Emile Smith Rowe a rest ahead of a busy January league schedule, so Joe Willock may well come in to take his place.

Mohamed Elneny could come in alongside Partey, as he did against Manchester United in November. That would allow both Granit Xhaka and Dani Ceballos the chance for a break as well.

Eddie Nketiah is now on a four-game run without an appearance, with even Folarin Balogun playing more minutes than him in that time. It’s his longest spell of the season away from the pitch, and will likely come to an end with a start against Newcastle.

Nicolas Pepe is also struggling for minutes with the emergence of Bukayo Saka at right-wing. He should start opposite Gabriel Martinelli, who is still building himself up to full match fitness.

Reiss Nelson will surely be in contention if he’s fit, but at this stage, it’s impossible to say if he will be. Arsenal and Arteta have been so secretive on his injuries so far.

Alexandre Lacazette is in great form and Arteta will want him against Palace, with the same going for Bukayo Saka. It’s not impossible the manager tries to play Pierre-Emerick Aubameyang into the goals, but Martinelli probably needs the minutes more. 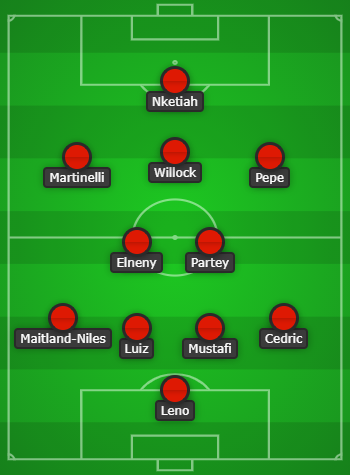