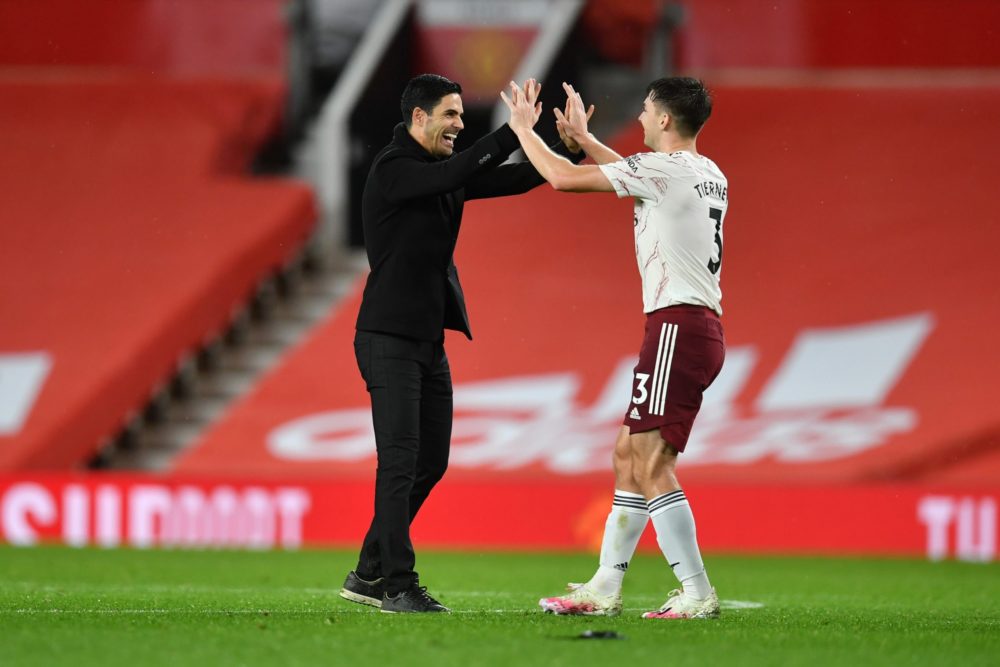 MANCHESTER, ENGLAND – NOVEMBER 01: Mikel Arteta, Manager of Arsenal and Kieran Tierney of Arsenal celebrate following their team’s victory in the Premier League match between Manchester United and Arsenal at Old Trafford on November 01, 2020 in Manchester, England. Sporting stadiums around the UK remain under strict restrictions due to the Coronavirus Pandemic as Government social distancing laws prohibit fans inside venues resulting in games being played behind closed doors. (Photo by Paul Ellis – Pool/Getty Images)

Mikel Arteta couldn’t stop himself from laughing after Arsenal’s win over West Brom when he was asked about Kieran Tierney being impervious to the cold after the full-back’s superb display.

After the game, a reporter asked Mikel Arteta about it all.

“He’s got something special in his blood because we’re all wearing snoods, gloves and hats!” Arteta said.

“He just goes out in his shorts and t shirt! It’s not like he’s acting, believe me. He’s very comfortable like that.

“From the moment I joined this club and he went through this shoulder injury, I saw a player with enormous talent with the perfect attitude and commitment.

“He is a joy to work with and I’m so happy for him with the goal he scored and everything he’s put in to be better every day towards the team and towards the club.

“He had some issues to adapt and it was a challenge for him to leave his house, and we are all trying to help him because the kid really deserves it. He’s a joy to work with.”