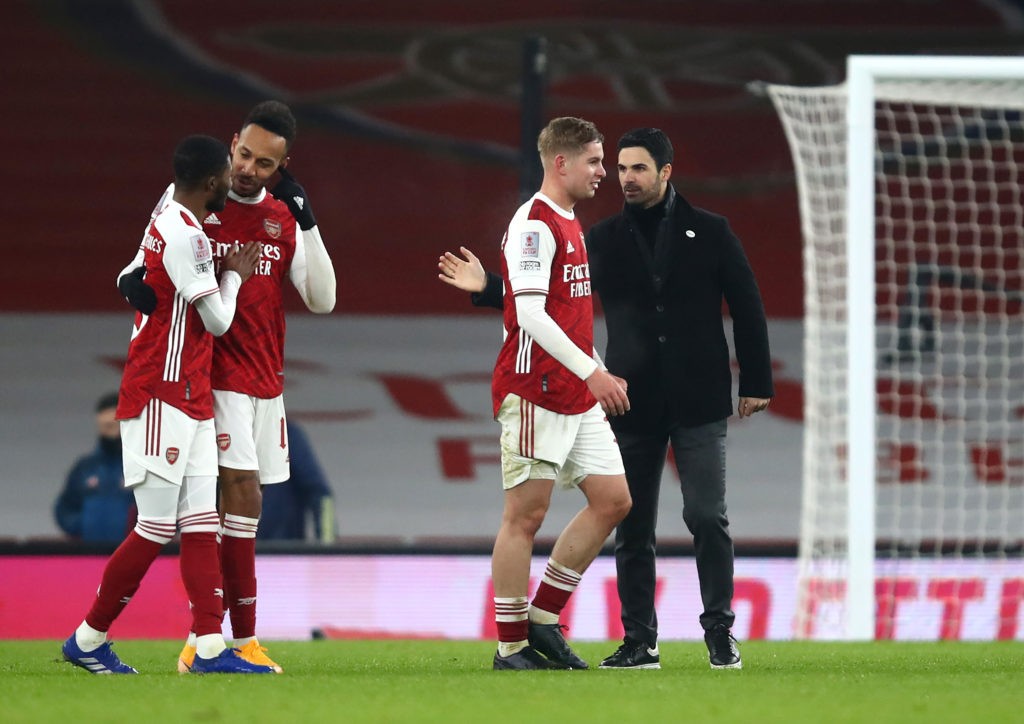 LONDON, ENGLAND – JANUARY 09: Mikel Arteta, Manager of Arsenal congratulates Emile Smith Rowe of Arsenal following their sides victory in the FA Cup Third Round match between Arsenal and Newcastle United at Emirates Stadium on January 09, 2021 in London, England. The match will be played without fans, behind closed doors as a Covid-19 precaution. (Photo by Julian Finney/Getty Images)

On the back of an unexpected run of four wins in all competitions, here’s our Arsenal predicted lineup vs Crystal Palace back in the Premier League.

Arsenal are finally putting a run of results together, following their dire situation up until Christmas. They have three consecutive Premier League wins, and they progressed to the fourth round of the FA Cup at the weekend.

Mikel Arteta needs to keep that momentum going for the next few games, before a difficult run begins with Southampton and Manchester United at the end of January. Here’s our Arsenal predicted lineup vs Crystal Palace.

After another strong performance and a third consecutive clean sheet at the weekend, Bernd Leno will have few doubts about his position right now. If anything, it’s reaching the point where we have serious concerns if he’s ever not available this season.

Pablo Mari has had a really good spell in the team in Gabriel Magalhaes’ absence, so it seems harsh to drop him out. But we’re predicting Gabriel and Rob Holding to remain the starting pair for now, with Mari and Luiz as alternatives on either side.

Hector Bellerin and Kieran Tierney should start in the full-back positions. Tierney is Mikel Arteta’s only real option on the left as things stand, and Bellerin is his best available right-back, particularly as Cedric came off against Newcastle with a knock.

On Saturday, Arteta suggested Thomas Partey was making good progress and should be in the squad to face Palace. But Dani Ceballos put in a strong performance against West Bromwich Albion last time out, so there’s no real rush to start Partey.

For this one, we’re predicting Granit Xhaka alongside Ceballos, with Partey returning to the squad on the bench. Emile Smith Rowe has to keep his place in the number 10 role after his goal from the bench at the weekend.

Alexandre Lacazette came on for 15 minutes out of 120 against Newcastle United and it was the 15 minutes in which Arsenal scored both of their goals. The striker set up Smith Rowe’s opener, and he’s in great form at the moment, so he should start.

Bukayo Saka is also a must on the right. Pierre-Emerick Aubameyang finally got back in the goals on Saturday, so he should start on the left for this one.

Willian cannot feature in the lineup, given his form. Nicolas Pepe had a decent performance against Newcastle, but it’s hard to displace Saka at the moment. 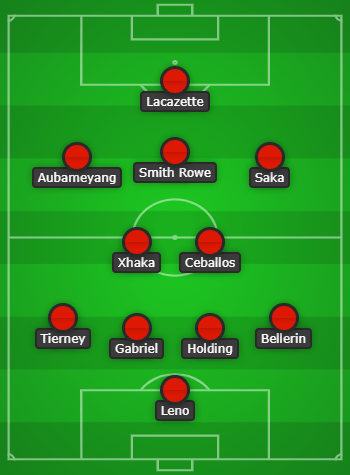