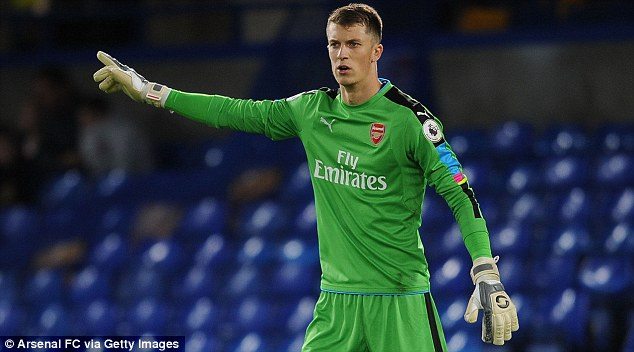 Matt Macey has finally left Arsenal to join Hibernian on a permanent deal.

With just six months left on his Arsenal deal, Mat Macey has finally left Arsenal despite actually wanting to leave in the summer.

“The 26-year-old joined us in October 2013 from Bristol Rovers, where he had been involved in their first-team squad at the age of 17.

“During his career with us, Matt made two first team appearances, both in the 2017/18 season. The first was in a 2-1 win over Norwich City in the EFL Cup, before the second came in a 0-0 home draw against Red Star Belgrade in the Europa League.

“He enjoyed a number of loan spells, most recently a successful period with Plymouth Argyle in 2018/19 when he was a regular for the Pilgrims in League One.

“During the past two seasons, Matt has been a regular in the first team matchday squad. After last season’s restart and following Bernd Leno’s injury, he was on the bench for every Premier League and Emirates FA Cup match, collecting a winners’ medal as part of the matchday squad for the final win over Chelsea at Wembley in August.”

Earlier this week it was confirmed that Macey was having a medical in Scotland ahead of the move but it was believed at that time to only be a loan. With his contract almost up, it seems the clubs have agreed a permanent deal which makes sense.

Arsenal have one keeper fit for the first team and no back-ups you could say are of a suitable standard.

Unless Arsenal make a move to sign a replacement in the winter window, this move will mean the chance to step up for youth goalkeepers like Karl Hein and Arthur Okonkwo.

Hein has already made a few appearances on the bench for the first team this season, whilst Okonkwo is in training with Mikel Arteta’s senior side at the moment. Either of them could make themselves the new third choice in Macey’s absence.

Alternatively, Dejan Iliev might return and take up the role. The 25-year-old spent the first half of the season with Shrewsbury Town, but they barely played him and his loan ends this month.