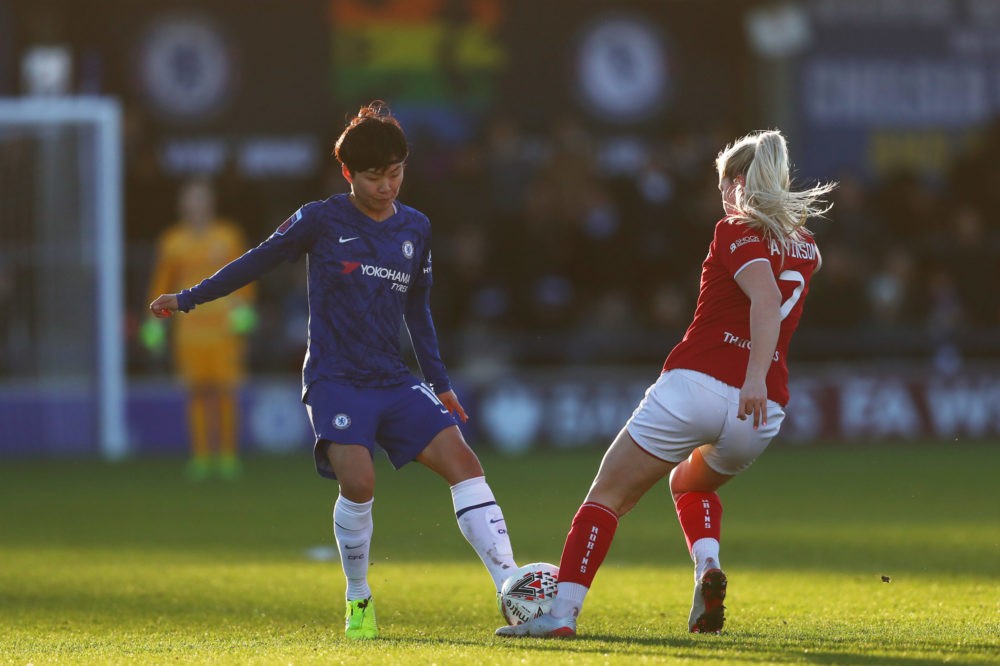 KINGSTON UPON THAMES, ENGLAND – JANUARY 12: So-Yun Ji of Chelsea battles for the ball with Poppy Pattinson of Bristol City the ball during the Barclays FA Women’s Super League match between Chelsea and Bristol City at Kingsmeadow on January 12, 2020 in Kingston upon Thames, United Kingdom. (Photo by Dan Istitene/Getty Images)

With Arsenal currently 2nd in the league, signing 1 or 2 in January would help the club get ahead of the summer, here we identify 4 possible signings.

Arsenal currently sit in second place in the league, virtually third with Chelsea’s two games in hand and the second half of the season will be very busy. Signing a couple of players to strengthen the team and get ahead of summer departures might be a good idea.

The current situation is Arsenal have 21 professional contracts and one Academy player who is a first-team squad regular.

We know that Joe Montemurro does not really like to have a huge squad, so one or two players might really be the maximum number of additions, unless someone decides to leave during this window.

Under the previous definition of homegrown player by the FA from a couple of seasons ago, Arsenal have seven players that fit in that category: Leah Williamson, Beth Mead, Kim Little, Jennifer Beattie, Jordan Nobbs, Lotte Wubben-Moy and Fran Stenson.

Ruby Mace is an Academy player that has its own homegrown regulations and she does not have a professional contract so far.  The rumoured number of homegrown players needed is eight, so Arsenal need at least one more homegrown player before September 2021.

Now, obviously the FA can decide that homegrown players need to be English only, while previously all they needed to do play three full seasons before their 21st birthday year in the English pyramid, regardless of nationality. But that was before Brexit happened, so in theory Kim Little and Jennifer Beattie could be out of the homegrown list should the goalposts get moved in the next six months.

The number of homegrown players needed might also be different from the reported eight. It is hard to assume anything with the FA because we know they tend to change things quite late and without warning, as seen recently with the Conti Cup runner-up rule that changed just before the last group games went to play.

The same can be inferred from the very late announcement of the new post-Brexit rules for work permits for the FA WSL/FA WC players.

So, with all that uncertainty, it is quite obvious that Arsenal will sign British players in the next two transfer windows and seeing EU players leave club would not be a surprise. It could be two or three next summer and Montemurro did say recently that they were looking at local players.

I think everybody knows about Anna Patten, who has finished her studies at the University of South Carolina and regularly trained with our squad while in England. She is a centre-back who can cover really well at right-back.

In the event of a couple of defenders leaving next summer, it would be clever to sign her now as she knows the team very well and was a key player in our unbeaten run in the Spring Series. It is genuinely a no-brainer and, like Lotte Wubben-Moy, bringing back a former player who had four successful years in the USA is what the club needs for many reasons.

Adding another midfielder would also help, but the big questions is should it be a number 6, 8 or 10 style player?

We actually have two number 6s in Walti and Gut, a number 8 in Nobbs, a couple of number 10s in Roord and van de Donk and a genius in Kim Little. So getting an attacking midfielder that doubles up as a winger would actually be useful.

Here are a couple of names that could be interesting to sign: Chloe Arthur from Aston Villa, a technical player with a high potential but has not been nowhere near it. I would also look at Poppy Pattinson, who is a left-back who does not get any game time with Everton and could come in to cover and compete with Steph Catley, allowing Katie McCabe to play in all four forward positions where she excels.

Another player with high potential is Ebony Salmon, a young striker from Bristol, and if there is an opening in the squad next summer, she should be one player to look at.

The January transfer window is an adjustment market and with Brexit rules coming in fresh, you don’t except Arsenal to make big moves, but there is hope that some players will be added to the squad to be able to compete for the Champions League places.