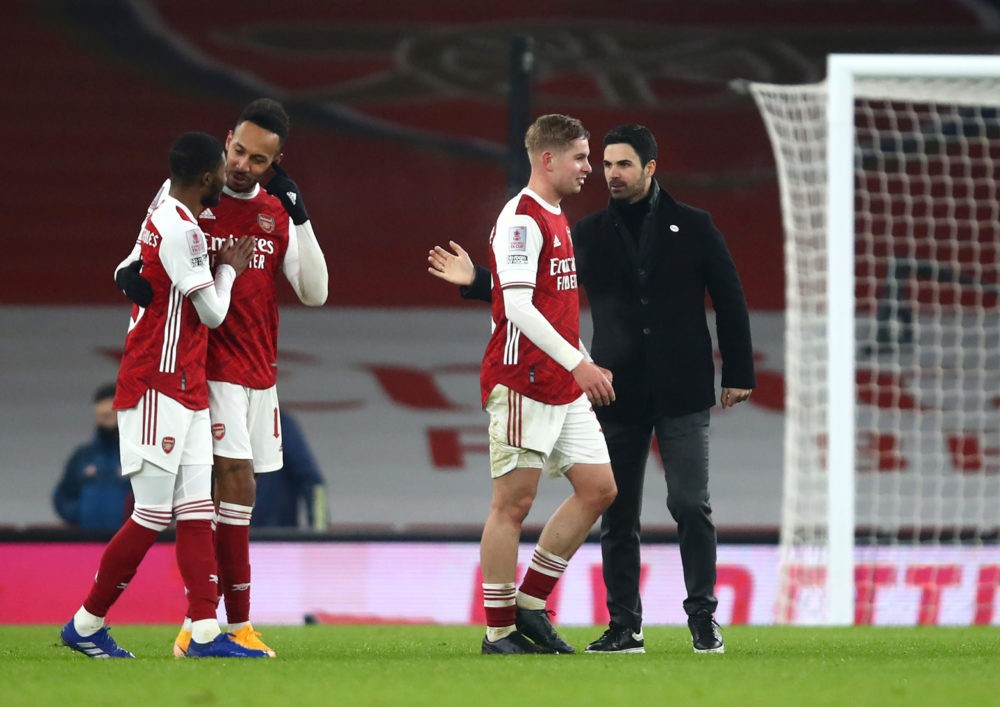 LONDON, ENGLAND – JANUARY 09: Mikel Arteta, Manager of Arsenal congratulates Emile Smith Rowe of Arsenal following their sides victory in the FA Cup Third Round match between Arsenal and Newcastle United at Emirates Stadium on January 09, 2021 in London, England. The match will be played without fans, behind closed doors as a Covid-19 precaution. (Photo by Julian Finney/Getty Images)

Gabriel Martinelli picked up what seems to be a serious ankle injury in the warm up ahead of Arsenal’s 2-0 win over Newcastle United.

Gabriel Martinelli’s injury was the only sour note on an evening that saw Arsenal progress in the FA Cup thanks to a 2-0 win over Newcastle.

Martinelli turned the ankle inwards (inversion ankle sprain); looks relatively mild so not that big of a deal https://t.co/ALglwv0a1I

Martinelli turned the ankle inwards (inversion ankle sprain); looks relatively mild so not that big of a deal https://t.co/ALglwv0a1I

Mikel Arteta has informed the press that “it does not look good,” before adding “I’m gutted”.

“I am gutted,” Arteta said. ” I was in my office before the game and one of the coaches came in and said that Gabi hurt himself, that he twisted his ankle. I went to the medical room and he was in tears.

“It didn’t look good. He was in a lot of pain and we’re gonna have to see how he is. He was in pain so I imagine we’re not gonna have good news with him.

“He’s a character that he wants to play the next game, hopefully it’s not too serious.”

Weirdly, Martinelli was just talking about being in tears with his knee injury in an interview on Saturday morning.

The game, which went to extra time, was largely a dour affair with Willian on the end of much of the fans’ ire. His removal and Emile Smith Rowe’s introduction was the game changer with the youngster opening Arsenal’s scoring with a lovely finish.

Pierre Emerick Aubameyang got on the end of a lovely exchange between Granit Xhaka and Kieran Tierney, surely man of the match, and his cross found the captain for a tap-in.