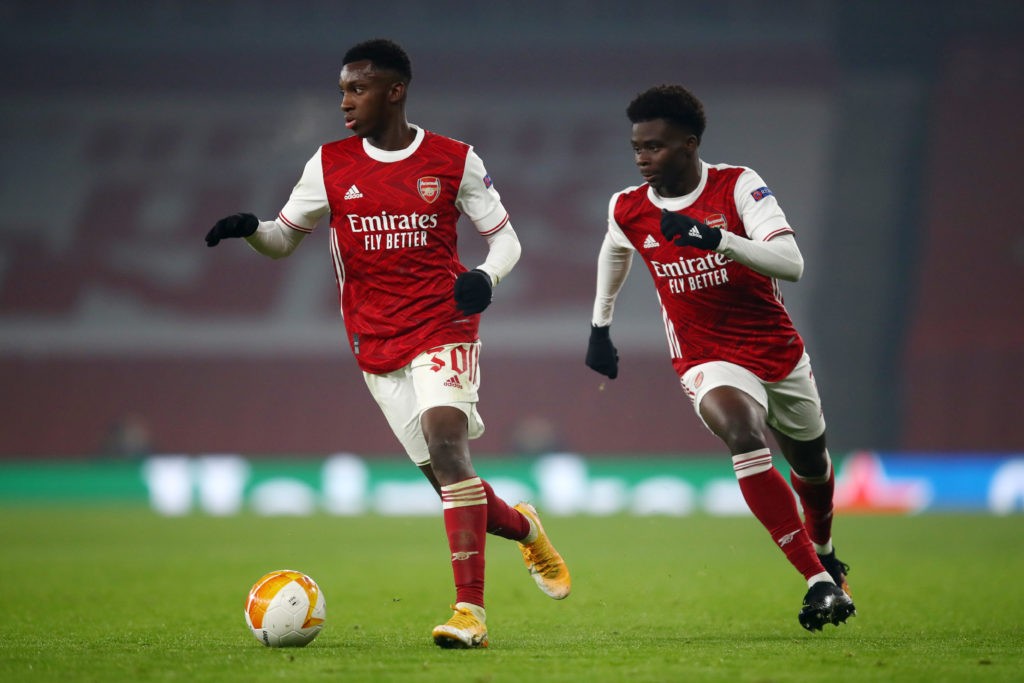 LONDON, ENGLAND: Eddie Nketiah of Arsenal and Bukayo Saka of Arsenal run for the ball during the UEFA Europa League Group B stage match between Arsenal FC and Molde FK at Emirates Stadium on November 05, 2020. (Photo by Julian Finney/Getty Images)

West Ham United are looking at Eddie Nketiah as a possible replacement for Sebastien Haller this month, according to a report.

The Evening Standard report that West Ham United are tracking Eddie Nketiah ahead of a possible January move for the Arsenal youngster. They sold Sebastien Haller last week for £20m, with the board promising David Moyes he can reinvest it this window.

Nketiah isn’t the only player on their shortlist, with Bournemouth’s Joshua King and Reims’ Boulaye Dia also among West Ham’s options, but they’re enquiring with Arsenal over the possibility of a deal for their former academy striker.

The same outlet claim it’s unclear whether Arsenal would consider a loan move or a permanent deal.

Rumours on social media suggest Arsenal might want as much as £30m for Nketiah. If that’s the case, it’s difficult to see a deal going through in the current circumstances. As mentioned, West Ham only brought in £20m for Haller’s departure.

Nketiah has become a bit of a fringe figure in recent weeks, dropping out of the Premier League lineup completely since Christmas.

With Pierre-Emerick Aubameyang, Alexandre Lacazette, Gabriel Martinelli, and Folarin Balogun also at the club, Arsenal have a decision to make on which of the five (including Nketiah) they want to put their faith in next season, then do business accordingly.

Gabriel Martinelli’s injury, however, might open the door for him again, but is that injury as serious as it seemed?