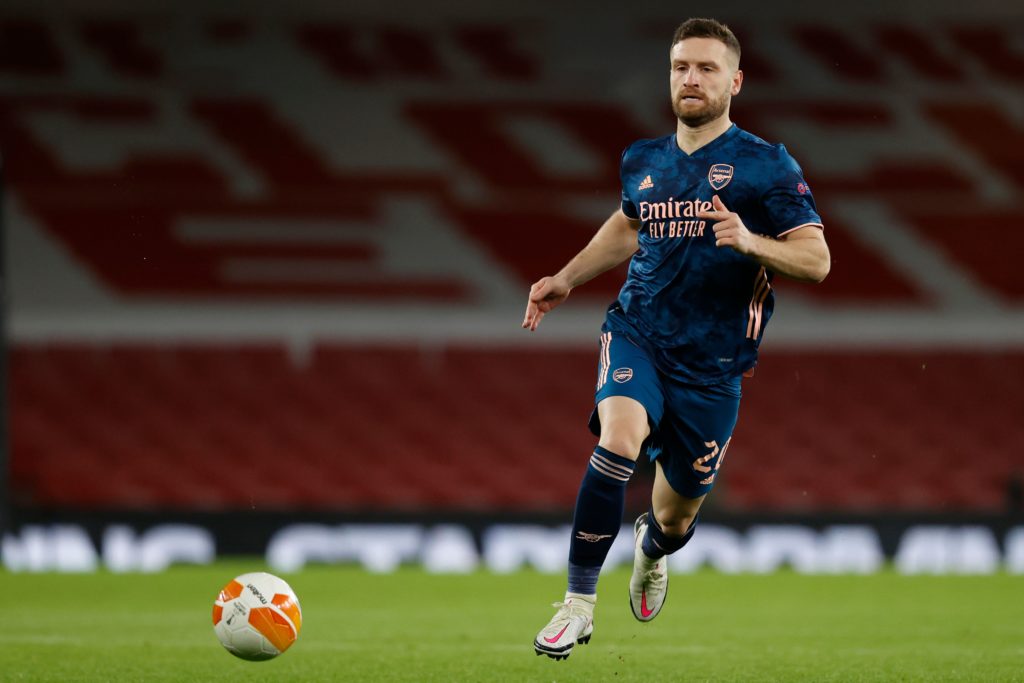 Arsenal’s German defender Shkodran Mustafi runs with the ball during the UEFA Europa League 1st Round Group B football match between Arsenal and Rapid Vienna at the Emirates Stadium in London on December 3, 2020. (Photo by ADRIAN DENNIS/AFP via Getty Images)

Mikel Arteta is strongly suggesting Shkodran Mustafi isn’t on the way out this month, with the defender likely to see out his Arsenal contract.

For the most part, Arsenal’s goal in the January transfer window seems to be trimming the squad. They’ve already sold Matt Macey, loaned William Saliba and Sead Kolasinac, with Mesut Özil and Sokratis Papastathopoulos following those three out.

One other obvious candidate for a departure is Shkodran Mustafi. The German’s contract expires in the summer – like Macey’s, Özil’s, and Sokratis’ – and he’s only played 43 minutes of league football this season.

Though the German featured heavily in the Europa League group stage, that was against lesser opposition during a period where Arsenal had plenty of defensive injuries.

Despite all that, Mikel Arteta claims Mustafi’s immediate future is with Arsenal. He argues that other January exits mean the club can’t afford to let the 28-year-old go.

“His future right now is here,” Arteta said. “We have Papa that probably is going to leave the club in this window, William (Saliba) that has already gone on loan, so we don’t have that many (centre-backs) right now.

“Gabriel’s been out now for a period, David (Luiz) has been injured, so the situation is completely different to before.”

Personally, I don’t think Arsenal need Mustafi for the second half of the season. They have Pablo Mari and Gabriel Magalhaes to play left-centre-back, Rob Holding, David Luiz, and Calum Chambers to play right-centre-back, and youth options available if necessary.

But I can see why the manager might play it safe, given all the injury problems in the squad this season. It looks like Mustafi is set for another six months in North London.