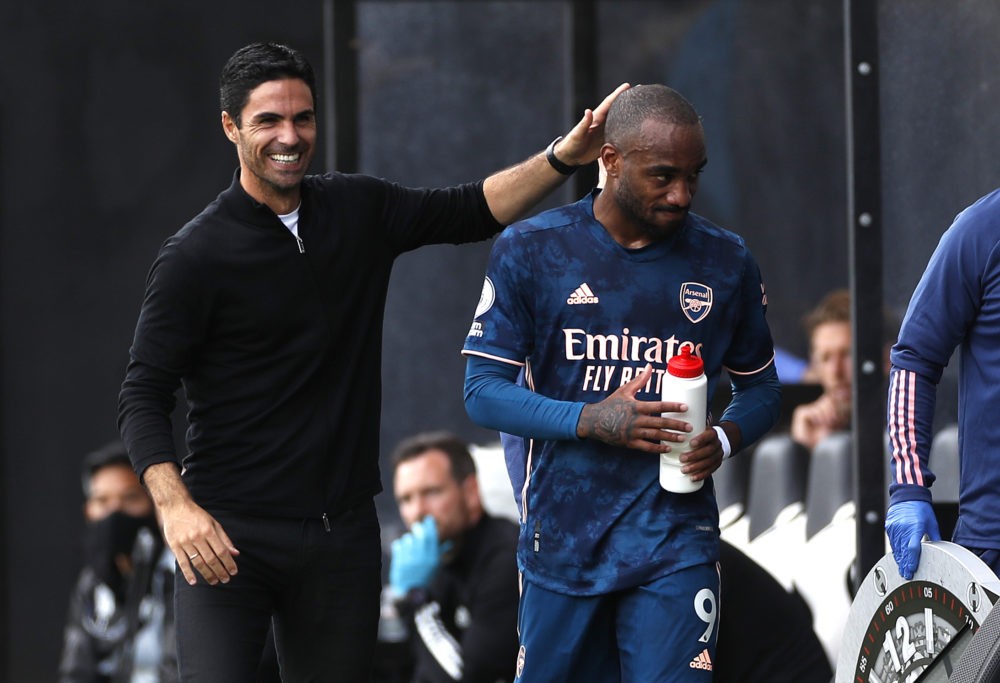 LONDON, ENGLAND – SEPTEMBER 12: Mikel Arteta, Manager of Arsenal interacts with Alexandre Lacazette of Arsenal after he is subbed during the Premier League match between Fulham and Arsenal at Craven Cottage on September 12, 2020 in London, England. (Photo by Paul Childs – Pool/Getty Images)

Atletico Madrid are interested in signing Alexandre Lacazette with the Spanish paper, AS, claiming that the forward does not enjoy a good relationship with Mikel Arteta.

Atletico Madrid have been long-time admirers of Alexandre Lacazette and, had they not been under a transfer ban when he finally left Lyon, there’s every chance the forward would have went to play for Diego Simeone rather that Arsene Wenger.

Their reported interest has waxed and waned since but it has never truly vanished and, with the window open, here we are again.

Real Madrid are also looking for a forward and are considering a move according to the report in AS that says, “If the thing [striker] is French, something that in Zidane’s Frenchified Madrid would not clash at all, Arsenal brings another bleu international, Alexandre Lacazette, into luck.

“At 29 years and a long history of comings and goings in his competitive attitude, Simeone likes him and his relationship with Mikel Arteta is not the best, in fact the Gunners have him in their squad cleaning operation. All in all, he continues to offer quality nights.”

Basically, what they said, before Google translate butchered it, is that Arsenal are still looking to clear Lacazette out.

Lacazette is out of contract next summer and there has been no talk of a new one apart from Mikel Arteta confirming in September that talks had not started.

“At the moment, we haven’t started any negotiations,” Arteta said. “We have a lot of things still to do in this market and at the moment we are focusing on those things.

“[Lacazette is] a player I’m really happy with. I think we’ve shown him a lot of faith since I arrived here. But we cannot stop any speculation.”

I believe this is the very definition of ‘damning with faint praise’.

Last July, Arteta said, “We have to have a chat about the next step with him and get his ideas and his feelings.

“As I said, I am really happy with him.

“He’s a player that I’ve always liked, even when I wasn’t here, because of what he brings to the team: his qualities, his ability, his work rate. So let’s see. Now we are in a crucial moment.

“It’s no time to talk about a lot of contract situations. We still have time and we will do it in the right moment.”

So, Arteta says he’s happy with him but with just 18 months left on his current deal there is still no sign of talks beginning.

Smart money would be on him leaving this summer, most likely for Atletico Madrid.