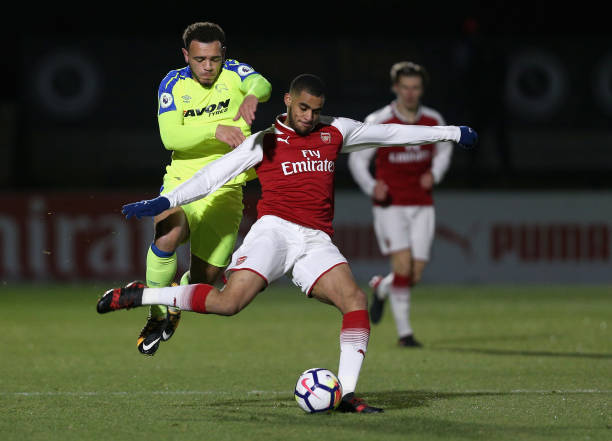 BOREHAMWOOD, ENGLAND – DECEMBER 15: Yassin Fortune of Arsenal shoots as Mason Bennett of Derby puts his under pressure during the Premier League 2 match between Arsenal and Derby County at Meadow Park on December 15, 2017 in Borehamwood, England. (Photo by James Chance/Getty Images)

Former Gunner Yassin Fortune looks set to follow Jeff Reine-Adelaide to their third shared club, as he closes in on a move to Angers.

Yassin Fortune and Jeff Reine-Adelaide spent three years of their youth careers together with RC Lens, before the two of them completed a double-deal transfer to Arsenal.

From there, Reine-Adelaide moved onto Angers, whilst Fortune left for Switzerland with FC Sion. Now, it looks like the two of them will be reunited in France again.

RMC Sport (via GFFN) report that Angers are on the verge of signing Fortune, offering him his first taste of senior football in one of Europe’s top-five leagues.

Of course, Reine-Adelaide has since moved onto Lyon, before joining OGC Nice on loan for the season. But they’ll get the chance to face off in Ligue 1 in early February if Fortune’s transfer goes through.

Fortune never entirely got going with FC Sion, amid various injury problems. In two-and-a-half seasons with the club he’s only made 17 league starts, scoring just a couple of goals. It was the same story at Arsenal, with fitness struggles holding him back.

Perhaps he’ll be able to get his career back on track in his home country again.