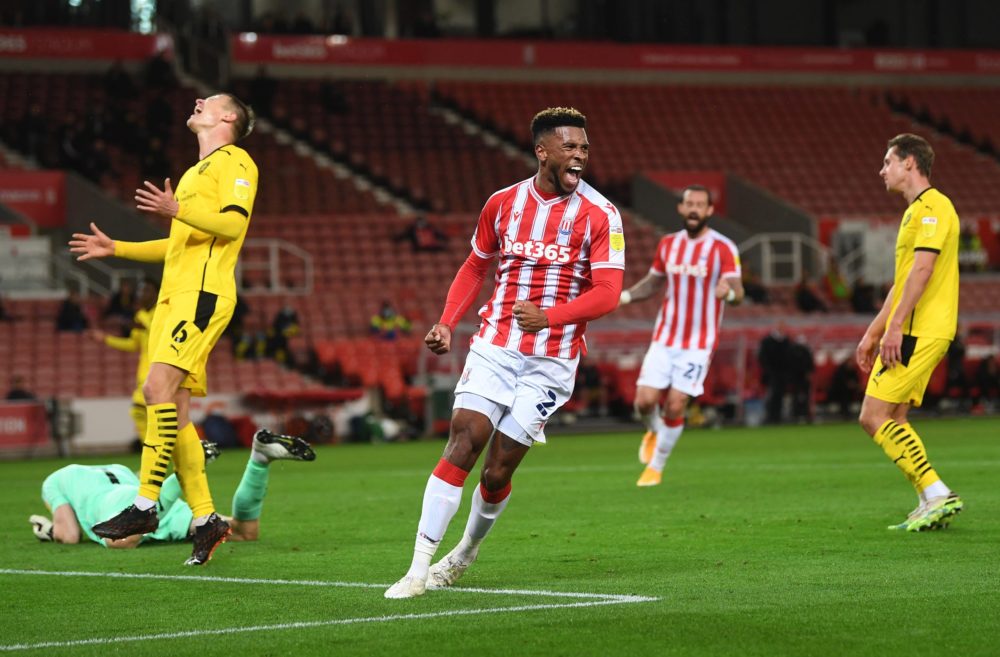 STOKE ON TRENT, ENGLAND – OCTOBER 21: Tyrese Campbell of Stoke City celebrates after scoring his sides first goal during the Sky Bet Championship match between Stoke City and Barnsley at Bet365 Stadium on October 21, 2020 in Stoke on Trent, England. Sporting stadiums around the UK remain under strict restrictions due to the Coronavirus Pandemic as Government social distancing laws prohibit fans inside venues resulting in games being played behind closed doors. (Photo by Gareth Copley/Getty Images)

Tyrese Campbell turning out to be a better forward than his Arsenal legend father, Kevin, but a serious knee injury has brought a halt to his career.

The 21-year-old plays for Stoke as a centre forward and had scored seven goals, with seven assists, in 18 games.

Campbell landed awkwardly in a game against Cardiff before Christmas.

Is Tyreese Campbell a player Arsenal should be looking at?

Campbell is a forward who likes to cut inside and, while he tends to play centrally, has also scored off both flanks, although he has played more on the right (P16 G9 A6, v P45 G2 A2 on the left). In fact, he scores more coming in from the right than he does when played centrally.

There’s no doubting Campbell’s pedigree. His dad, Kevin, played 441 times across his career, scoring 107 and assisting 12. He played for Arsenal more than any other side (161 appearances), scoring 40 and assisting three while also winning the league and European Cup Winner’s Cup.

Tyrese, still very much at the beginning of his career, has already hit the back of the net 60 times in 141 games. He has also equalled his dad’s career assist total of 12.

To compare, that’s a direct-goal-involvement rate of 1.95 versus his dad’s 3.7. No comparison, really.

The problem, however, is that many of those goals for Tyrese have come at youth level.

So what about Tyrese Campbell’s senior stats?

Tyrese Campbell has played 65 times for Stoke’s first team (18 goals, 10 assists) and 15 times for Shrewsbury Town, where he scored five.

That leaves him just two away from his dad’s assist total.

As for his direct goal involvement rate at senior level, that’s 2.42 – slightly lower than his overall rate when you factor in youth goals, but still impressive given the step up and still much better than his dad’s.

We won’t get to watch any more of Campbell for a while and much will depend on how he recovers from his knee injury, but he certainly looks like he might be a player with a bigger future ahead of him than playing with Stoke in the Championship.

Seven of Campbell’s Stoke goals have come from his right foot, nine with his left and there has been one penalty and one header.

Kevin Campbell owned a record label called 2 Wikid. Their first signing was Mark Morrison who had topped the charts with ‘Return of the Mack’ in 1996 however that does not seem to have been a fruitful partnership that ended up with court injunctions being ordered.