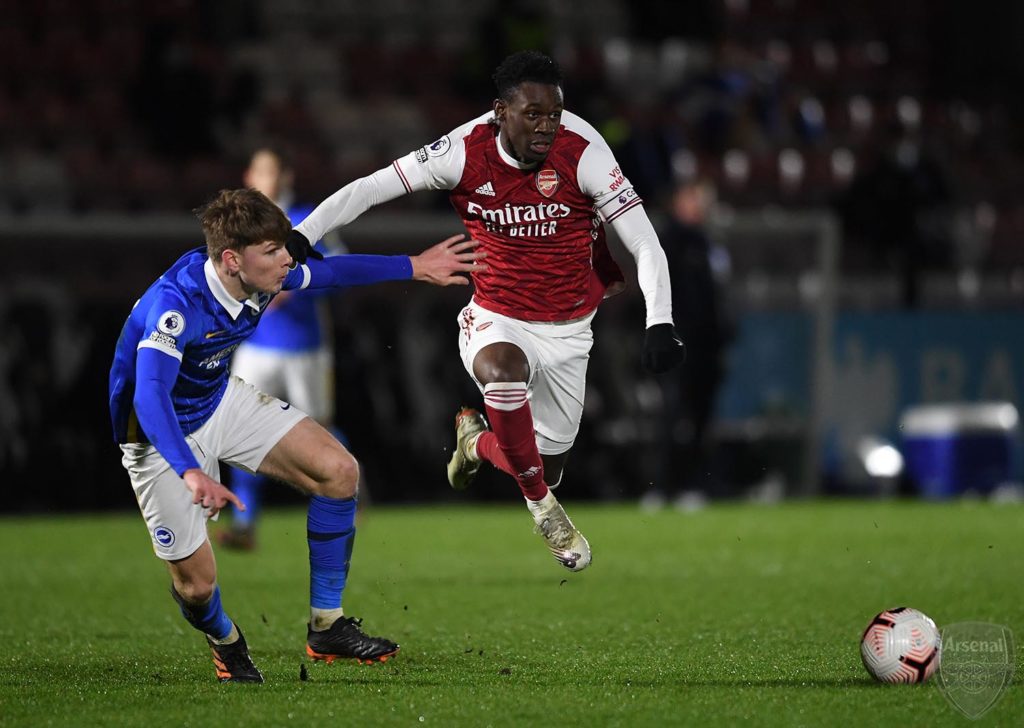 Folarin Balogun scored a hat-trick to continue his recent run of form as the Arsenal u23s made it five wins in a row on Friday.

On the back of victories over Blackburn Rovers, Everton, Derby County, and Leicester City, Arsenal u23s hosted Brighton and Hove Albion on Friday looking to start off the new year in the same vein.

Steve Bould had a strong side at his disposal, with Joel Lopez returning from injury at left-back, Joseph Olowu making his first appearance after his loan, whilst recent senior debutants Folarin Balogun, Ben Cottrell, and Miguel Azeez also started.

Another recent injury sufferer, George Lewis, was also back on the bench.

Azeez quickly opened the scoring, firing in from the edge of the box in the sixth minute. Balogun got the assist, though Azeez still had a lot to do when he picked the ball up.

Balogun then doubled Arsenal’s lead before the first 10 minutes were up, dribbling through the Brighton defence and slotting home.

The two then combined for a third just before half-time, with Azeez teeing up Balogun for his second goal.

Brighton came out after the break ready to put the pressure on Arsenal, and talented goalkeeper Arthur Okonkwo had to be alert on a number of occasions to maintain his clean sheet.

But as time ran out, Brighton’s hopes of a comeback slipped away, and Nikolaj Moller compounded their misery by tapping home from Tim Akinola’s square ball, after good work from the midfielder in the build-up.

With seconds to go until the end of the match, Balogun made it 5-0 and completed his hat-trick.

Technically, this isn’t Balogun’s first hat-trick at u23 level, as he got one against Blackburn Rovers last season. However, without meaning to downplay that performance, all three goals came from the penalty spot. He scored two penalties and a penalty rebound.

By comparison, all three goals on Friday night were from open play, which makes the achievement a bit more noteworthy. Plus the assist, it’s clear to see why Arsenal are trying to hold onto Balogun. He just needs to sign that new deal.