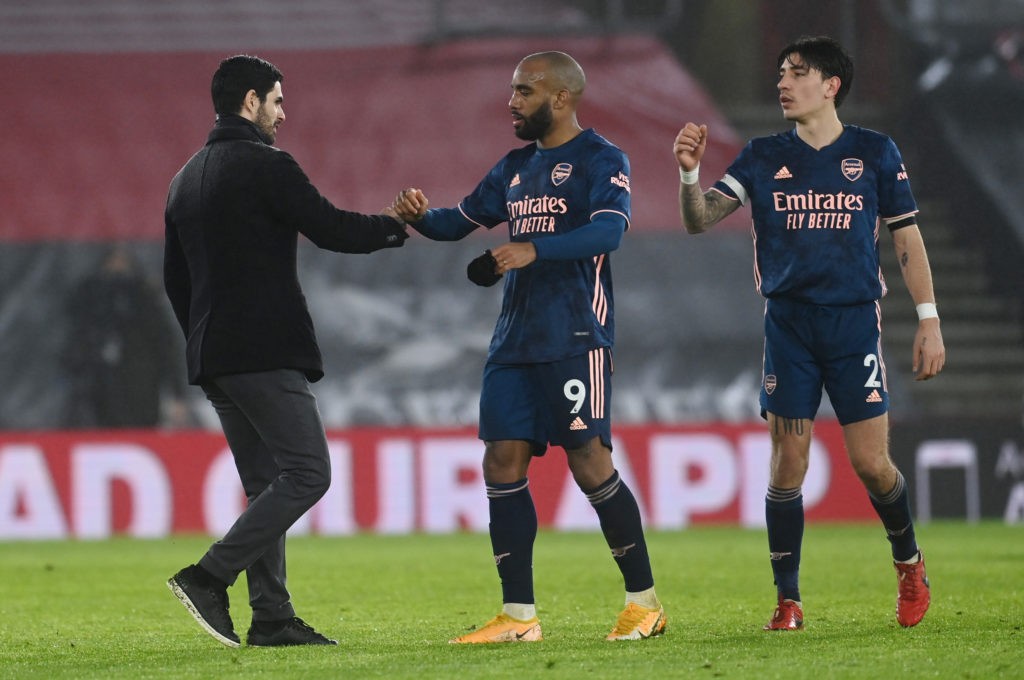 Looking to keep their unbeaten run going against tough opposition, let’s take a look at our Arsenal predicted lineup vs Manchester United.

Even if they have just lost at home to bottom-of-the-league Sheffield United, Manchester United are still among the top teams in the division. Arteta will need to pick his strongest available side to get a result on Saturday.

Arsenal are on a run of five wins in six matches in the Premier League, since their Boxing Day rejuvenation. But the real test is keeping it going in the tougher fixtures now. The win away to Southampton was a good start, but it was only a start.

Bernd Leno will start, barring injury. He almost made a wonder-save to prevent Southampton’s only goal on Tuesday, and he made plenty of other difficult stops to keep the hosts to just one. Before that, he was on a run of four Premier League clean sheets.

But it’s good to see Mat Ryan involved with the squads immediately after his loan move. Hopefully, he can put some pressure on the German to keep performing.

Runar Alex Runarsson seems to have dropped out of contention for starts, amid the rumours of a possible loan away.

Even if he doesn’t leave, the goalkeeper may find games difficult to come by in the next few months, given the risk that Arsenal have to leave out another non-homegrown player. You’d think he’s high on the list of candidates for exclusion with Ryan and Leno around.

David Luiz did not have a good day against Southampton, and Pablo Mari is only just returning to training after injury this week. As a result, Gabriel Magalhaes seems like the most sensible choice at left-centre-back right now.

It’s true that Gabriel also had a poor first half against Southampton in the previous game, but he very much improved after the break. Some rustiness was expected after his recent absence. Plus, he played very well against United in the away match.

Rob Holding will probably start alongside him, with Hector Bellerin at right-back. Cedric Soares played well at left-back on Tuesday, but if Kieran Tierney’s back it’s difficult to leave him out, and the signs are that he will be.

Granit Xhaka is likely to keep his place, but the other two spots in the midfield really depend on how the injury situation develops in the next couple of days. Thomas Partey, Emile Smith Rowe, and Dani Ceballos all have question marks around their availability.

Reports suggest Partey ‘should be fine’ after his early substitution, which would be a big boost after his performance at Old Trafford.

Thomas Partey has recovered well from the Southampton game. He will have one last check today, but is expected to be fit to face United.

If Smith Rowe isn’t available, Martin Odegaard is fit and eligible for selection. But perhaps this game would come too soon for him, after only a couple of days training with his new side. Then there’s Willian, who replaced Smith Rowe on Tuesday.

Given Smith Rowe’s injury has only been described as ‘discomfort’, we’re going to stay optimistic that he can start the match, even if he has to come off early.

Nicolas Pepe is one of only a few players who played the 90 minutes of both matches against Southampton – though he did come off in injury time in the second.

It’s not impossible he starts on the left once again, but perhaps it’s more likely Gabriel Martinelli gets a game. Particularly if Tierney is available, as they probably suit each other better with the left-foot right-foot combination.

Pierre-Emerick Aubameyang is another option, but his current circumstances are somewhat unclear. It’s possible he’ll have to quarantine after visiting his family. So we’re leaving him out, for now.

For the other two positions, there shouldn’t really be any debate. Alexandre Lacazette up front, Bukayo Saka on the right. They each got an assist for the other’s goal on Tuesday. 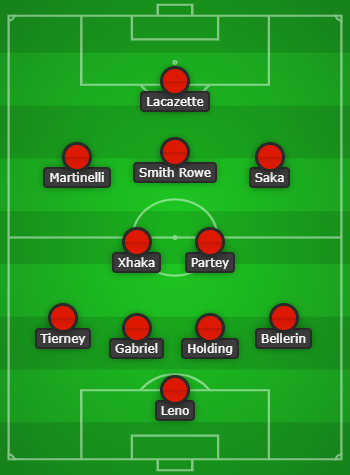