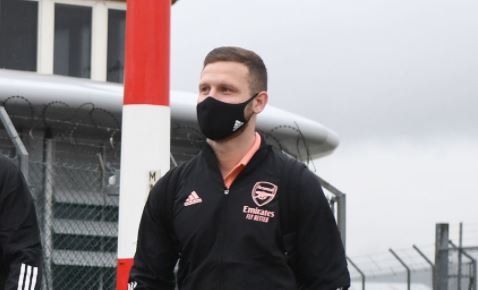 Shkodran Mustafi has reportedly terminated his contract with Arsenal, ahead of a permanent transfer to Schalke on deadline day.

Bild reporter Kilian Gaffrey reported in the early afternoon on Monday that Shkodran Mustafi and Arsenal had finally agreed to terminate his contract.

This was the final hurdle in a complicated series of deals seeing Mustafi join FC Schalke, at which point Schalke could loan Ozan Kabak to Liverpool until the end of the season.

Journalist Constantin Eckner confirmed the news, adding that Mustafi’s move was therefore a free transfer. Fabrizio Romano has since tweeted out that’s it’s ‘confirmed’ that Arsenal and Mustafi have an agreement to terminate his deal.

It doesn’t look like Arsenal are going to receive any financial benefits, other than getting Mustafi’s wages off the bill.

Let’s wait and see, though, because all the reports said similar things about Mesut Özil before it later turned out that Arsenal would earn up to €1.7m through various potential bonuses from Fenerbahce.

The main benefit to Arsenal will be avoiding having Mustafi sitting around not playing matches. They’ve run out of non-homegrown spots for the defender, so he would have faced the same situation as Özil and Sokratis did in the first half of the campaign.

With Mustafi gone, Arsenal would have enough spaces for all their players in the Premier League squad. They’d still be one player overstocked in the Europa League squad, with Runar Alex Runarsson surely the most likely to miss out.