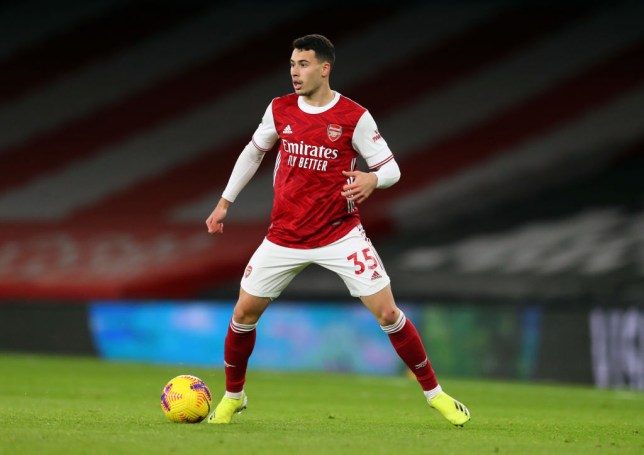 Martinelli still getting back to full fitness.

Mikel Arteta has explained Gabriel Martinelli’s lack of match rhythm has prevented him from starting more games for Arsenal in recent weeks.

Martinelli enjoyed a superb debut campaign for the Gunners last season until a serious knee injury ended his campaign early in June.

The Brazilian made his long-awaited return in December but suffered an ankle injury in the warm-up ahead of an FA Cup third round tie against Newcastle.

Arsenal have suffered back-to-back defeats in the league for the first time this year with Martinelli left on the bench with his side chasing games against Wolves and Aston Villa in recent weeks – with the out-of-form Willian preferred at Villa Park last Saturday.

Asked why the 19-year-old is not starting more games ahead of Sunday’s clash with Leeds United, Arteta told a press conference: ‘He came back and did really well, but then he picked up another injury. It took him a while to come and now it’s about getting in his rhythm and getting his place in the team like anybody else.

‘Don’t forget that we played him last time against Manchester United and he started ahead of other players, so it’s not like he’s not having the opportunities. We know that he’s got a huge potential and he’s done some really good things since he’s come back.

‘He has a lot of things to develop in his game because of course at his age it’s normal. He came here from a different league and physically it’s much more demanding than the Spanish league. He got injured, he wanted to get back, he got back and then he got injured again, so his rhythm has been in and out.’

Arteta added that Martinelli may be putting too much pressure on himself to do well despite his lack of fitness with the Gunners boss eager for him to fully recover.

He added: ‘He hasn’t had a pre-season and he hasn’t had the type of that is needed for such a change. Then it’s probably anxiety from being so willing to do well and to feel important because he’s a big signing.

‘All those things add up and he broke down again, so we have to be patient now and he needs to recover properly because he’s going to be key for us.’