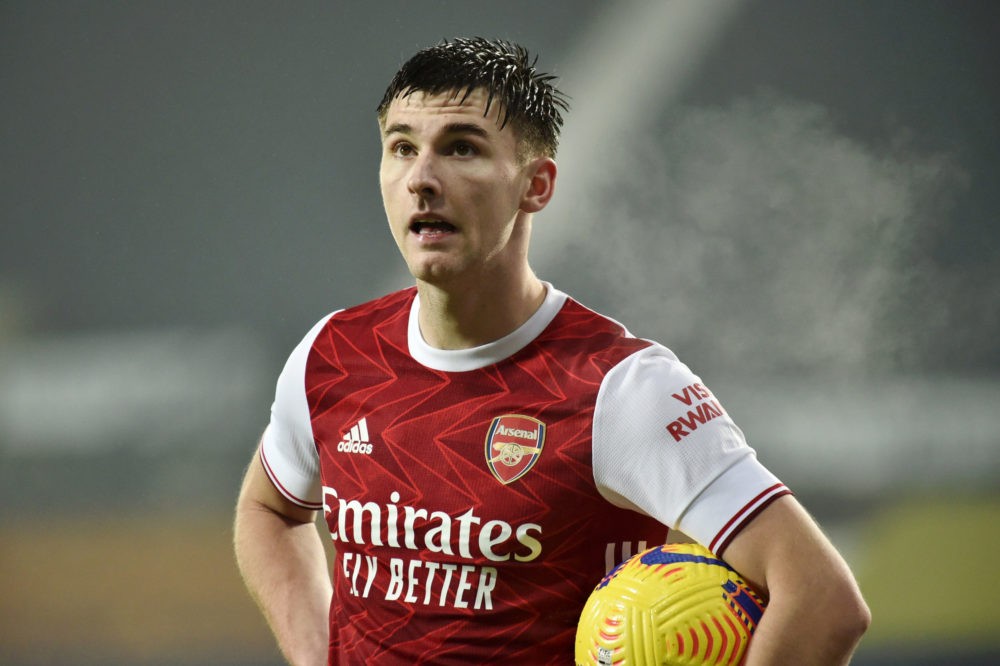 WEST BROMWICH, ENGLAND – JANUARY 02: Kieran Tierney of Arsenal looks on during the Premier League match between West Bromwich Albion and Arsenal at The Hawthorns on January 02, 2021 in West Bromwich, England. The match will be played without fans, behind closed doors as a Covid-19 precaution. (Photo by Rui Vieira – Pool/Getty Images)

Kieran Tierney has returned to training with Arsenal giving the Gunners a major lift before their games against Benfica and Manchester City.

After missing the last six games with a leg strain and knee issue, Kieran Tierney has returned to training with Arsenal.

Speaking just a few days ago, Mikel Arteta said it ‘seems unlikely’ that either Thomas Partey or Kieran Tierney would be available for Arsenal’s matches this week.

Arsenal are currently facing one of their tougher weeks of the season so far. First up, they play their first Europa League knockout match, the first leg away to Benfica. Then, they’ll host league leaders Manchester City – who are on a 16-game winning streak.

It looked like Arsenal would have to make do without two of their key players in Kieran Tierney and Thomas Partey. Both have had injury problems recently and Mikel Arteta didn’t seem too optimistic about them returning to action this week.

“It seems unlikely at the moment. But probably if there is one player who has got a bigger chance, it’s Kieran, because probably in the next few days he can start to do some parts with the team,” Arteta revealed.

“But I don’t know how it is going to evolve when he gets a little bit closer to training with the group.”

Tierney has had a couple of issues with his right leg, and Arteta’s last update confirmed he’ll rejoin training this week. However, that return to training doesn’t necessarily mean a return to the pitch just yet, as they need to evaluate the condition of his knee.

As for Partey, he has a hamstring problem, and reports suggest he’s likely to miss both legs of the Benfica tie. Nothing in Arteta’s most recent comments contradicts that assessment.