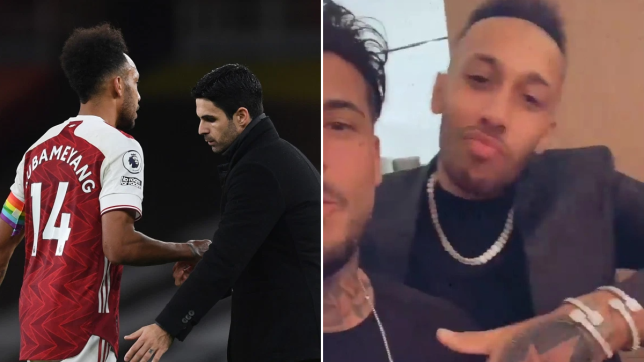 Mikel Arteta has defended Arsenal captain Pierre-Emerick Aubameyang after the striker appeared to break coronavirus lockdown rules by getting a new tattoo.

The 31-year-old was pictured on Instagram alongside Spanish tattoo artist Alejandro Nicolas Bernal with a new inking on his hand, though UK government regulations required tattoo parlours – both mobile and static – to close during the latest lockdown.

Neither of the men were wearing masks or social distancing, with Arsenal confirming they would look into the matter amid suggestions tattooist Bernal is part of Aubameyang’s bubble.

After investigating the incident, Arteta says the matter has been dealt with internally.

‘We tried to advise every player and make sure they know the rules,’ said Arteta.

‘If someone doesn’t do it then obviously we have to act immediately on it. ‘I cannot tell you who every player lives with but we do.’

Kieran Tierney returned to training yesterday but the tie may come too soon for the Scot to make his return from injury, having missed the last six matches.

Arteta was joined at the press conference by former Benfica ace Cedric, which suggests the full-back is in line to start.