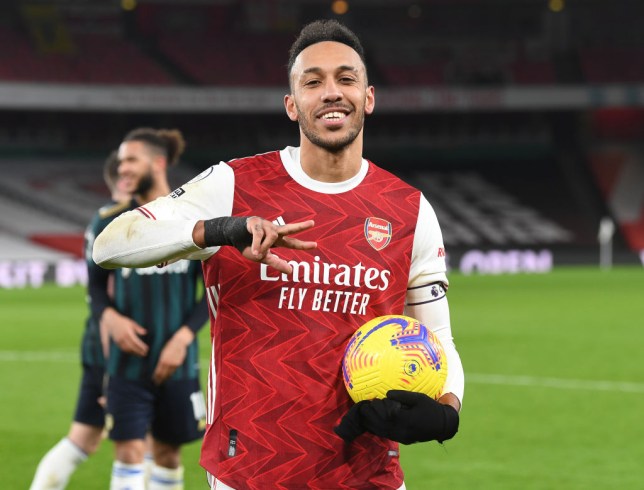 Gunners captain Aubameyang, who started for the first time in five games after leaving the country to visit his ill mother, netted his maiden Premier League treble upon his return.

Leeds threatened to cause an upset in the second half with Pascal Struijk and Helder Costa getting on the scoresheet but Arsenal held on for the win.

A beaming Saka raved about the impact of Aubameyang and admitted the Gunners will need him ahead of a tough week of games which includes the first leg of their Europa League knockout tie against Benfica, followed by a home clash with league leaders Manchester City.

‘He’s amazing, I can’t speak highly enough of him,’ Saka told Stadium Astro. ‘Today he showed everyone how much quality he has when he gets the chances he’s going to put them away.

‘He can drift out to the left and dribble, he can do everything.

‘We’re so happy to have him and its good he got the hat-trick for confidence. We have a big week ahead and we hope he can score many more goals for us.’

January loan signing Odegaard impressed on his full debut for the Gunners and suggested after the game that he would be open to extending his stay at the Emirates beyond the end of the season.

Saka was full of praise for the Norway international midfielder and is excited to have a player of his ability in Arsenal’s ranks.

‘He’s amazing,’ Saka added. ‘He has a lot of quality. I’m looking forward to playing more with him and scoring some goals, assisting him and having some fun.

‘He’s an amazing football player and I hope he does well for Arsenal Football Club.’