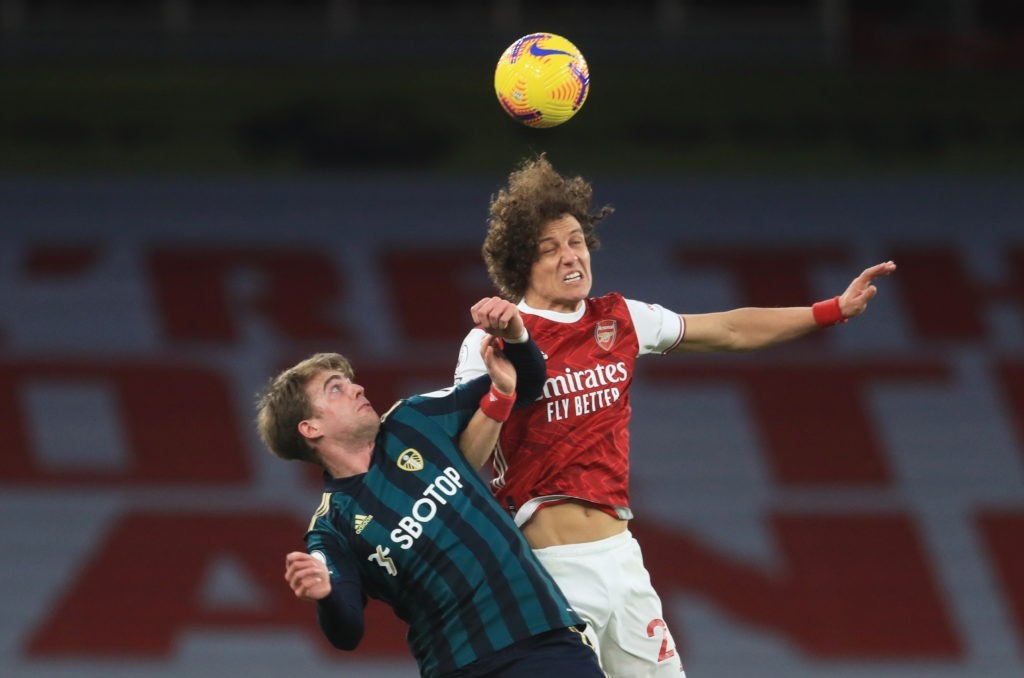 LONDON, ENGLAND – FEBRUARY 14: David Luiz of Arsenal wins a header over Patrick Bamford of Leeds United during the Premier League match between Arsenal and Leeds United at Emirates Stadium on February 14, 2021 in London, England. Sporting stadiums around the UK remain under strict restrictions due to the Coronavirus Pandemic as Government social distancing laws prohibit fans inside venues resulting in games being played behind closed doors. (Photo by Adam Davy – Pool/Getty Images)

Arsenal haven’t held any discussions with David Luiz over a new contract just yet, despite reports to the contrary in recent days.

That’s according to Chris Wheatley of Football.London, who writes that there have been ‘no discussions’ between Arsenal and David Luiz over a new deal. Talks are likely to reopen only at the end of the season, and the player’s future remains unclear.

At the weekend, a report from The Independent suggested Luiz was set for a contract extension, with Mikel Arteta keen to keep him. You can read more about that below.

It’s possible there’s some truth on both sides. Perhaps Arteta really is pushing to keep the defender, but they aren’t planning to make any firm decisions until the summer.

Luiz is up to 20 appearances for the season so far, despite increased levels of competition through the permanent arrivals of Pablo Mari and Gabriel Magalhaes, as well as the resurgence of Rob Holding and the injury comeback of Calum Chambers.

The 33-year-old was clearly deemed a better option than Shkodran Mustafi and Sokratis Papastathopoulos, who were pushed out on permanent deals in January.

It certainly doesn’t seem impossible Arsenal plan to keep him for another year, but it seems we shouldn’t expect any rapid progress on a deal in the coming weeks.

David Luiz’s new contract is reportedly back on after the defender apparently impressed Mikel Arteta in a story that was clearly written before the defender lost possession 21 times against Leeds.

Sometimes, timing is everything and it can make or break an announcement, however despite losing the ball an impressive 21 times against Leeds as Arsenal won 4-2, I don’t think a David Luiz masterclass would have seen Arsenal fans respond any better to the news that a David Luiz is set to stay for another year.

So say the Independent, who published their story so quickly after the final whistle they obviously had it ready before the match.

The Independent report, “David Luiz is set to be offered another extension at Arsenal, as Mikel Arteta greatly values his influence on a young team.

“The club’s general policy has been to offer one-year deals to players over the age of 30, so the Brazilian’s current contract runs out at the end of June. Arteta wants the 33-year-old to sign on again as he performs a key role in the side.

“An apparent recklessness also runs contrary to the reputation for responsibility the defender has among the squad.”

Before David Luiz’s latest red card against Wolverhampton Wanderers, Mikel Arteta spoke about the possibility of a new contract for the defender.

But when David Luiz was the centre of another controversy, as his red card just before half-time sparked a comeback for Wolves to turn around a 1-0 deficit and win 2-1, it once again raised the question of what the club plan to do with the former Chelsea defender after this season.

Prior to the match against Wolves, Mikel Arteta revealed that’s a conversation they’re planning to have later in the season, as long as he keeps his performances up.

“We haven’t [talked] yet,” Arteta said just 10 days ago. “There are still a few months to go on that. I talk to him all the time about this kind of thing so we’re in a good position. What I want is he keeps performing like this until the end of the season.

“He’s a great example for [the young players]. He’s got a good mixture between some banter and some stick with them.

“They all listen to him because of who he is and what he has done in the game but as well they see how he behaves every day, how professional he is and how he goes about the job. He’s one of the key role models we have in our team.”

CBS Sports report that Arsenal are ready to consider offers for Calum Chambers in the summer, with Sokratis Papastathopoulos and Shkodran Mustafi already leaving the club in January. It’s not impossible Arteta decides to keep Luiz around for his experience in their absence.

For once, the Arsenal fans didn’t put much of the blame to Luiz for his red against Wolves. Despite his reputation for conceding these kinds of penalties and picking up red cards since joining, it was clear that on this occasion the contact was minimal and unintentional.

That being said, you’d be hard pushed to find many who want to see him remain at the club any longer than he has to.