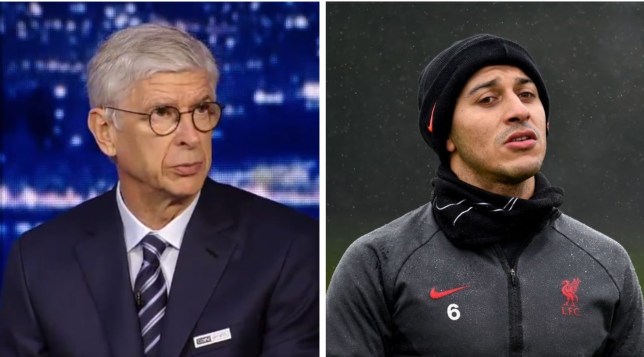 Arsene Wenger has explained the ‘problem’ with Thiago at Liverpool

Former Arsenal manager Arsene Wenger has explained the ‘problem’ Jurgen Klopp has with Thiago at Liverpool.

Thiago – rated as one of the best midfielders in Europe – was expected to thrive at Anfield but he has endured an underwhelming first season in the Premier League.

The 29-year-old has missed a number of games due to injury and even when fit has at times flattered to deceive, with Liverpool’s title defence crumbling over the past month.

Arsenal legend Wenger is aware of Thiago’s ability but says he has unwittingly caused a ‘problem’ for Reds boss Klopp.

Speaking ahead of Liverpool’s 2-0 Champions League win over RB Leipzig, Wenger told beIN Sports: ‘Thiago, for me, shows the typical problem of a manager.

Thiago Alcântara starts tonight for Liverpool, Arsène Wenger reveals what the midfielder takes away from the team. #beINUCL #UCL

‘Liverpool were very hungry and aggressive in midfield. As a manager, you think, “now I want to make the team better and I’ll get a technical player”.

‘When you get a technical player you lose the aggression in midfield and you destroy a little bit of the strength of Liverpool.

‘They have certainly less capacity today to win the ball back and they suffer a little bit more. So sometimes when you want to improve the team, you take something away from the team.’

Liverpool have endured a dismal run in the Premier League but got back to winning ways on Tuesday night, beating Leipzig 2-0 to put one foot in the quarter-finals of the Champions League.

After a goalless first half, Mohamed Salah gave the Reds the lead on 53 minutes, capitalising on a defensive blunder to fire past Leipzig goalkeeper Peter Gulacsi.