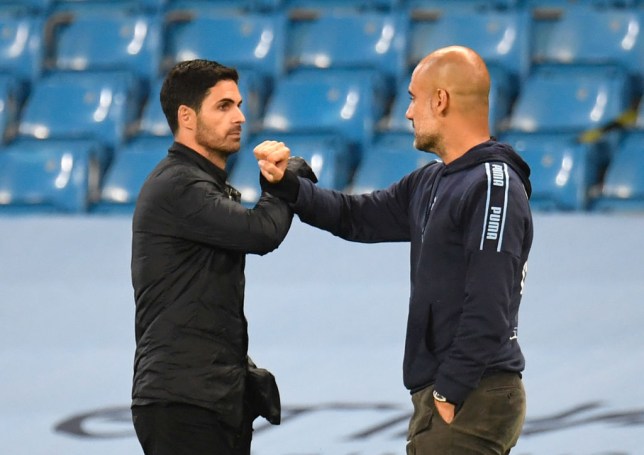 Guardiola was complimentary of his former assistant

Pep Guardiola has backed Mikel Arteta to turn Arsenal into ‘real contenders’ for the Premier League title in the near future.

Since taking up his first managerial post at the Emirates, Arteta has already secured silverware with his side’s FA Cup triumph last year, but it is in the league where they have struggled.

The Spaniard led the Gunners to an eighth-placed finish last season, and heading into their meeting against league leaders City on Sunday, they find themselves down in 10th place in the current standings.

Arsenal began to turn things around in the winter period after a miserable start to the season, and Guardiola feels their performances in recent months is a more accurate representation of their quality The City boss also believes the Gunners have an abundance of attacking quality and thus and tipped Arteta to make his side strong contenders for titles in the ‘early future’.

‘All I can say is the last months show me that all managers need time and he is not an exception,’ Guardiola said on Friday.

‘What I see in the last two months every game Arsenal played is better than the opponent. ‘Tomorrow we will have an incredible performance. They have an exceptional build-up, they move with many, many sense, all the movements they have for the build-up to the final third.

‘The quality for incredible energy, for Smith [Rowe], [Bukayo] Saka and [Pierre] Aubameyang, especially with his runs in behind, and all the players that they have in the middle. ‘In the early future they will be real contenders to fight for the titles.’

Despite being his mentor for three years, Guardiola doesn’t feel he inspired Arteta and neglected to take any credit for his coaching capabilities.

‘I did not inspire him, what he knows he knows for himself,’ Guardiola added. ‘I am not any influence. What he is doing, all credit to him and his backroom staff.’