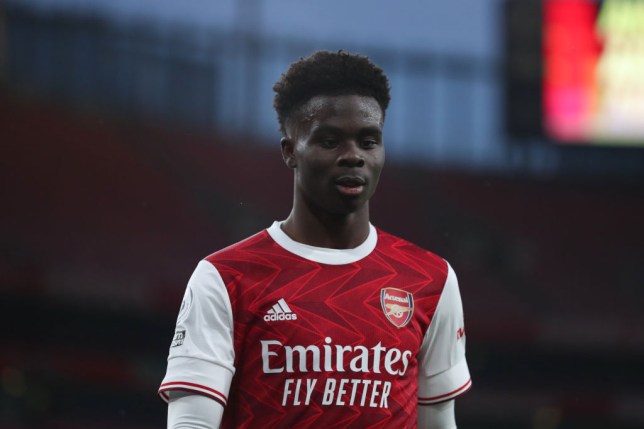 Arsenal legend Ian Wright has urged Mikel Arteta to keep playing ‘generational talent’ Bukayo Saka on the right flank where he feels the youngster ‘can do the most damage’ to opposition teams.

Saka, 19, has established himself as one of the most exciting teenagers in Premier League football over the last two seasons and his versatility and adaptability has made him a key squad player for the north London club.

Kieran Tierney’s struggles with his fitness saw Saka fill in at left wing-back for much of last term and the England international produced some outstanding performances in the Scot’s absence.

But former Arsenal striker Wright believes Saka is most effective on the right side of a three in support of captain Pierre-Emerick Aubameyang, where he was played to devastating effect in the Gunners’ 4-2 victory over Leeds United on Sunday.

Saka combined brilliantly with Martin Odegaard and Emile Smith Rowe throughout the Premier League clash and ran Ezgjan Alioski ragged with his pace and trickery at the Emirates.

Speaking on Ringer FC’s ‘Wrighty’s House’ podcast, Wright said: ‘He is a generational talent. What he’s doing right now, holding up the club and everything he’s doing, his form… ‘And people talk about Serge Gnabry but Serge Gnabry wasn’t doing what Bukayo is doing at this particular time.

‘What was really noticeable the other day – and I know Mikel is saying he could have used him on the left – but on the right he definitely gives more.

‘That man has to be played in an offensive role for Arsenal. He has to, especially now we’ve got Odegaard and Emile Smith Rowe. ‘He should be played where he can do the most damage and at the moment that’s from the right.’

The iconic ex-Arsenal and England forward added: ‘I’m so excited about him and he’s one of those guys who I genuinely take real umbrage to anybody fouling him.

‘Obviously [Nicolas] Pepe wasn’t playing in that game and I’m seeing light now Saka has emerged on that right-hand side. ‘When we saw what Alioski was trying to do to him in this game. He was kicking him all over the place!’

Arteta hinted he was open to the possibility of making Odegaard’s deal permanent after the Norwegian’s impressive performance against Leeds and Wright hopes Arsenal are already exploring this option.

On whether Arsenal should try and sign Odegaard permanently, Wright responded: ‘We have to! ‘You’ve got Aubameyang and we’re talking about an elite striker. It’s no coincidence that he’s got these three creative players behind him now when he didn’t before.

‘Before Emile Smith Rowe got in there he only had Bukayo Saka so we’re talking about somebody who needed these guys to do what we saw them do against Leeds because he could have scored five goals.

‘I was always in Aubameyang’s corner. People were saying, “He’s not getting service” and he f***ing wasn’t! The reason why we’ve signed Aubameyang on that kind of contract is for what he can do in front of goal.

‘Now he’s got three guys behind him, I know it’s a bit early with Odegaard, but what I’ve seen and the composure he’s got, how beautiful he plays the game. Then there’s Saka and Emile Smith Rowe.

‘People are quite happy with [Thomas] Partey and [Granit] Xhaka and Xhaka looks magnificent with Partey and obviously we need to sort out the central pairing but I’m starting to feel really confident about what we might be able to do.

‘This test coming up against Manchester City is going to be interesting simply because I want to see how he approaches it because he can’t approach it like Leeds obviously.’

Arsenal’s squad are preparing for the first leg of their Europa League last-16 tie with Benfica in Rome this evening.

Arteta will be hoping for a positive result and performance at the Stadio Olimpico which could give them some much-needed confidence ahead of their meeting with a rampant Manchester City side, who sit ten points clear at the top of the Premier League table.