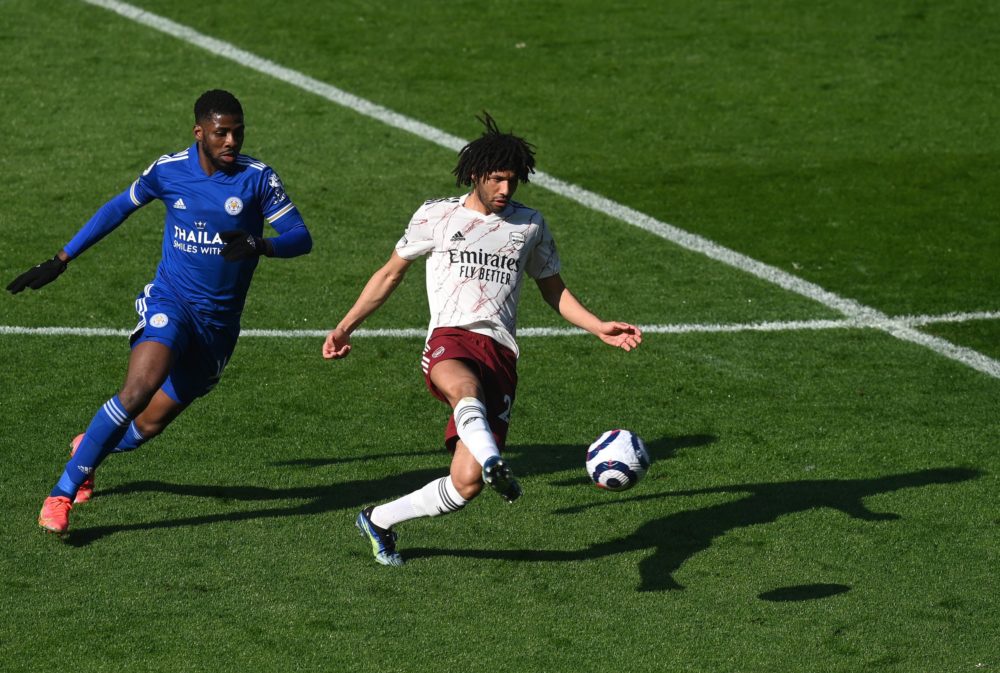 LEICESTER, ENGLAND – FEBRUARY 28: Mohamed Elneny of Arsenal is closed down by Kelechi Iheanacho of Leicester City during the Premier League match between Leicester City and Arsenal at The King Power Stadium on February 28, 2021 in Leicester, England. Sporting stadiums around the UK remain under strict restrictions due to the Coronavirus Pandemic as Government social distancing laws prohibit fans inside venues resulting in games being played behind closed doors. (Photo by Michael Regan/Getty Images)

That Mohamed Elneny is still an Arsenal player will remain one of life’s little mysteries. It’s not that Elneny is a bad player, he’s just not a great one either. As I’ve said before, he’s generally reliable but will rarely do anything spectacular.

Against Leicester, Elneny was started, playing 66 minutes before being replaced by Thomas Partey, who is still making his way back from injury.

Speaking about the game, Ian Wright picked Elneny out for criticism over Leicester’s goal.

“Slack marking. It’s just slack play. Elneny has to come across at some stage but Tielemans goes through and you have to give him credit, he is in total control of what he is doing,” Wright told Optus Sport.

“But he [Elneny] has to comes across. Jamie Vardy is taken, he can see that.

“You want to keep it as tight as you can but because of a silly mistake, and poor concentration, they are 1-0 down. It could have been avoided,” he added.

Elneny still has another year to run on his Arsenal contract and, while it would seem sensible to think he will be on his way this summer, I wouldn’t go putting any money on it.

Turkish outlet Aksam (via KingFut) reported that Besiktas were looking to re-sign Mohamed Elneny in January on a permanent deal, planning a €7m bid. The Super Lig club took the Arsenal midfielder on loan last season and he had a strong campaign.

Chris Wheatley, however, denied the claims. He wrote on Twitter that Elneny to Besiktas is ‘not happening this month’, adding that the midfielder is happy at Arsenal and Mikel Arteta has no plans to sell him.

Elneny has been a regular feature of Arteta’s sides this season. He’s made 28 appearances, 21 of them starts, featuring in 58% of Arsenal’s Premier League fixtures.

It’s worth noting the circumstances that allowed that to happen. Thomas Partey’s injury problems and Granit Xhaka’s red card have forced Arteta’s hand at times.

That’s not to say Elneny hasn’t earned his starts by consistently working hard for the team. You’d just expect €50m-signing Partey to take his place once he’s fit again.

All the same, it doesn’t seem like Elneny is ready to give up and move on just yet.

In November, Mikel Arteta said Arsenal are taking things ‘step by step’ with Mohamed Elneny, amid media rumours of a contract extension.

In November, the Daily Mail reported that Arsenal were preparing to discuss a contract extension with Mohamed Elneny, after his strong start to the season.

Admittedly, the Mail’s report was a bit dodgy. At one point, they wrote that Elneny’s deal “is currently poised to expire at the end of this campaign”, but later say it “expires at the end of next season”.

When Elneny signed the deal, the Mirror, the Evening Standard, talkSPORT and others reported it ran to 2022. Plus, Mikel Arteta suggested in his pre-Molde press conference that they’re taking things slow with the midfielder.

“Let’s go step by step please,” Arteta responded to Elneny contract questions. “What I can say is that I am really pleased with the player and everything that he is doing and hopefully he can continue like that and perform really well throughout the season.”

Elneny is already up to nine appearances this season, playing the full 90 minutes in all but one of those games. In November, when the report was published, only four players in the squad had made more appearances, and only three had played more minutes.

Since then, however, Elneny has dropped down to ninth in terms of minutes played this season, behind (in order of most minutes) Bernd Leno, Granit Xhaka, Bukayo Saka, Hector Bellerin, Rob Holding, Pierre-Emerick Aubameyang, Kieran Tierney, and Nicolas Pepe.

However, only five players (Leno, Saka, Xhaka, Laca and Pepe) have featured in more matches than Elneny’s 28 at the time of writing.

Of the three games Elneny missed, Arsenal lost two. So it’s no real surprise the fans are starting to warm to him again, despite largely expecting him to leave over the summer. Winning away at Old Trafford helps too.