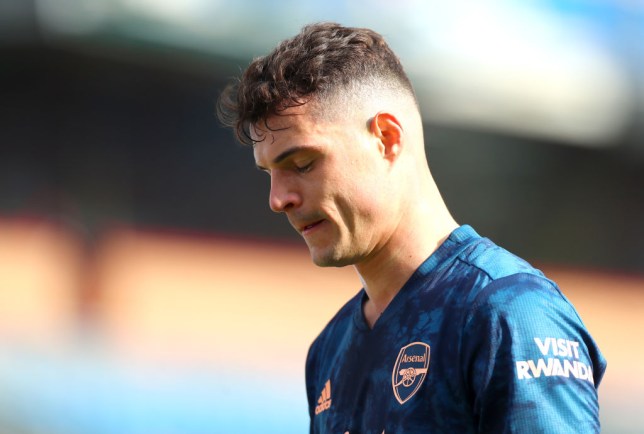 Ian Wright says he ‘feels for’ Granit Xhaka after his error in Arsenal’s 1-1 draw with Burnley and believes the midfielder had been playing ‘very, very well’ alongside Thomas Partey prior to the costly mistake.

Pierre-Emerick Aubameyang beat Nick Pope with an early strike to break the deadlock at Turf Moor and the Gunners looked set to take their advantage into the half-time break before Xhaka’s calamitous piece of play in the 39th minute.

Chris Wood couldn’t believe his luck as Xhaka struck him with a wayward pass meant for David Luiz and the Swiss looked on in dismay as the ball rolled past Bernd Leno and into the back of the net.

Arsenal heaped the pressure on their opponents in a thrilling final period but the visitors’ frustrations continued as the woodwork, the video assistant referee and some inspired Burnley defending combined to deny them all three points.

Wright was encouraged by Arsenal’s performance on the whole – with his former club dominating chances and possession away from home – but the legendary ex-England striker was disappointed Mikel Arteta’s men once again failed to capitalise and secure victory.

‘The pros were very good in terms of chances created and playing out from the back which I think is brilliant what they’re doing,’ Wright said on BBC’s Match of the Day. ‘Obviously we saw when it doesn’t go right but, in the main, Arsenal have to take the chances they create and that didn’t happen today.’

Reflecting on Aubameyang’s opener, Wright said: ‘When you get Thomas Partey playing, he gets the ball into those lines and he wants to pass it. This was brilliant for the goal. ‘He gets the ball in an area where if you’re closed down they [Burnley] might be able to get it but they’re playing. ‘Him and Xhaka – who played very, very well together and Xhaka has been playing well – they do well, get out of that very well and then once you get the ball to Aubameyang… obviously [Matthew] Lowton’s got to show him on the left, he doesn’t and Aubameyang comes inside and they get the goal. A fantastic goal.’ 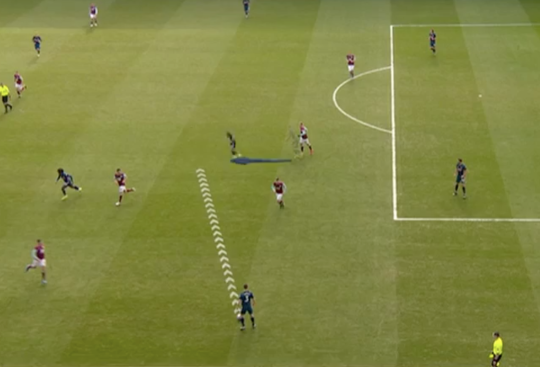 Wright defended Arsenal for trying to pass it out from the back prior to Burnley’s equaliser and felt the goal could have been avoided had Xhaka demanded the ball from Kieran Tierney earlier in the play.

‘This is where people are saying, “Just go long!”. No! Because we’ve just seen from playing out the back that Arsenal can do it,’ he added. Asked by Gary Lineker whether the advantages of playing it out from the back outweigh the disadvantages, Wright replied: ‘Absolutely. ‘What we see here is a calamitous goal, don’t get me wrong. But it could have been avoided.

‘When you look at this situation, I think he’s got to be getting the ball here [above]. He’s got to be demanding it and I think someone like Thomas Partey probably would have done that. ‘He doesn’t do it there and then once it comes back to Bernd Leno, you’re thinking “alright he’s seen that he’s got three options over there” so you’re thinking “this is no problem, he’s just gonna whip it out there first time”. ‘His face says everything. I feel for him because he’s been playing very well with Thomas Partey but that kind of cost you.’

Erik Pieters was the focus of two contentious handball calls after the break as the Clarets clung on to secure their fourth draw in five games in the Premier League.

‘Of course they got it wrong, just as much as he got the first one brilliantly right,’ Wright said. ‘How is that not a penalty?! Kevin Friend has got it wrong. He ain’t got many friends tonight!

‘The fact is that is stopping Pepe from going past him. ‘Mikel Arteta is saying they need to come down and explain it again. It’s ridiculous! That’s a penalty.’