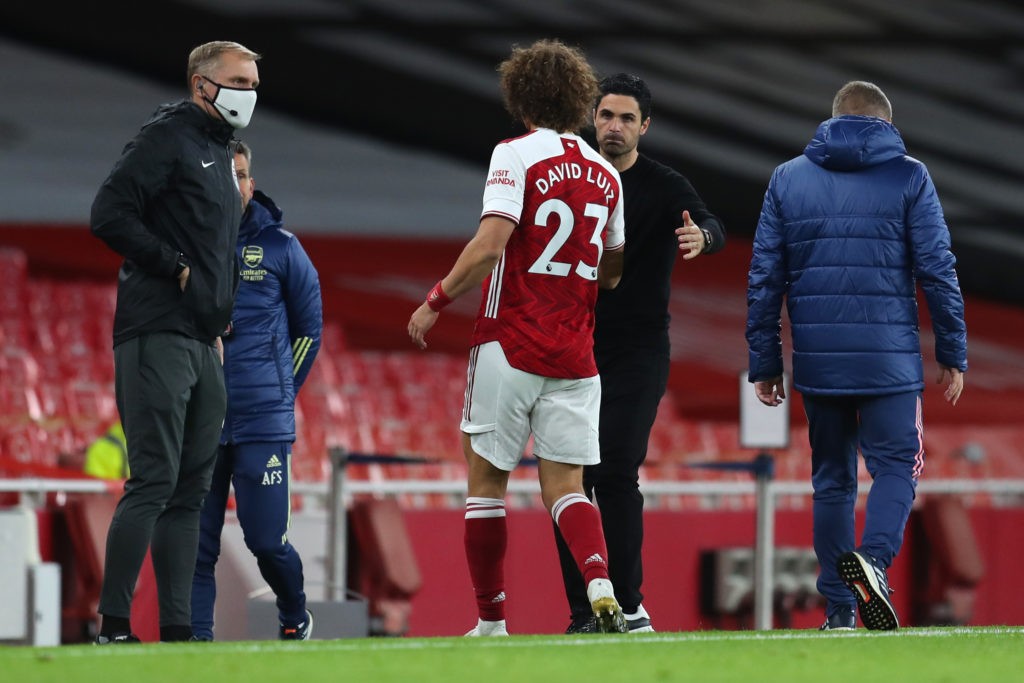 LONDON, ENGLAND: David Luiz of Arsenal is embraced by Mikel Arteta, Manager of Arsenal as he is substituted off following an injury during the Premier League match between Arsenal and Leicester City at Emirates Stadium on October 25, 2020. (Photo by Catherine Ivill/Getty Images)

Mikel Arteta says David Luiz and Arsenal will make a joint decision over a potential contract extension at the end of the season.

In mid-February, reports suggested Arsenal were planning to offer David Luiz a contract extension to remain with the club next season. However, these claims were quickly shot down by other reports that the two parties were not in negotiations just yet.

In a recent press conference, Mikel Arteta seemingly confirmed that they weren’t holding talks with Luiz just yet, by telling the media they only plan to make a decision at the end of the campaign.

Arteta was asked about Luiz’s contract situation and whether the defender is a positive influence in the dressing room.

“He’s got huge experience of how to win things, but as well how to manage difficult moments and you need that.

“He’s a presence, he’s a leader and someone that is playing really well at the moment. What I want is that he keeps playing like that until the end of the season and we’ll make that decision together.”

Luiz is up to 25 appearances for the season so far, despite increased levels of competition through the permanent arrivals of Pablo Mari and Gabriel Magalhaes, as well as the resurgence of Rob Holding.

The 33-year-old was clearly deemed a better option than Shkodran Mustafi and Sokratis Papastathopoulos, who were pushed out on permanent deals in January.

Luiz is far from faultless, but he’s the only outfield player in Europe’s top-five leagues to play over 1,000 minutes without being dribbled past. It’s not too hard to imagine Arteta deciding to keep him for another year if this one ends well.