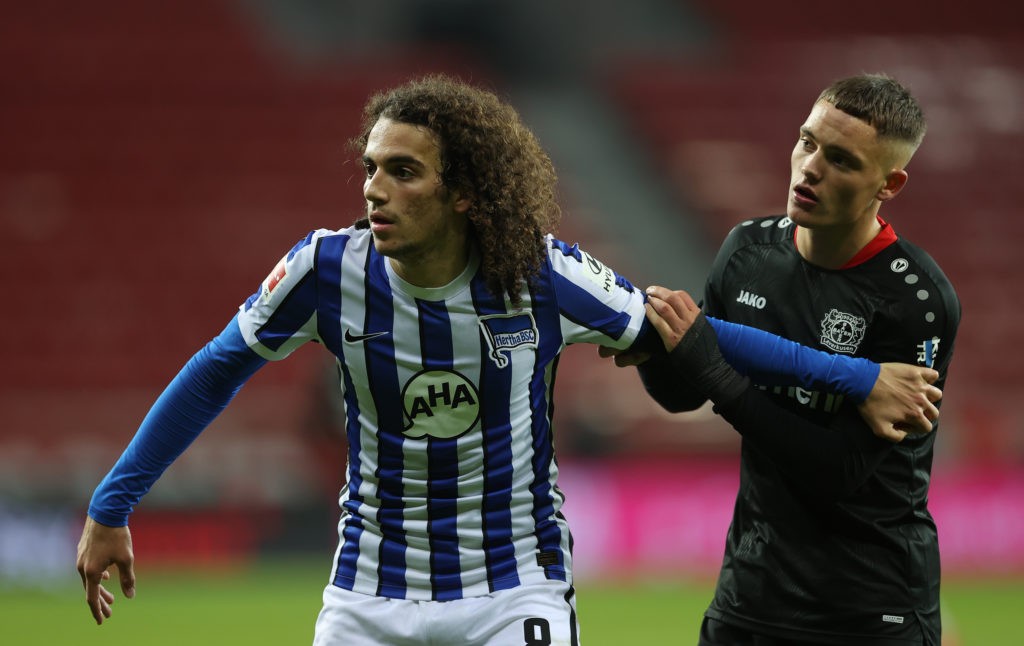 LEVERKUSEN, GERMANY: Matteo Guendouzi of Berlin is seen with Florian Wirtz of Leverkusen during the Bundesliga match between Bayer 04 Leverkusen and Hertha BSC at BayArena on November 29, 2020. (Photo by Lars Baron/Getty Images)

Matteo Guendouzi picked up an injury ahead of Hertha BSC’s clash away to Borussia Dortmund, ruling him out of the 2-0 defeat.

After revealing their lineups on Saturday, Hertha BSC reported that Matteo Guendouzi was one of three players to pick up ‘slight knocks’ in the build-up to the game. The trio were ruled out of the Dortmund clash at short notice.

There’s currently no confirmation of the nature of Guendouzi’s injury, other than it was enough to keep him out of the Dortmund game but it isn’t anything too serious.

Still, it’s another setback in a list of them for the Arsenal loanee lately.

First, Guendouzi lost the manager who brought him to Hertha and played him regularly, Bruno Labbadia. Pál Dárdai replaced Labbadia and doesn’t seem quite as keen to start him. Then, Sami Khedira joined the club permanently to provide competition in midfield.

After that, Guendouzi made a couple of mistakes in a recent defeat, to draw criticism over his maturity from Dárdai. Then when he finally looked like turning things around by helping Hertha to a comeback win, he picked up an injury.

Given it’s just a knock, we’ll hope to see the French u21 international back starting again soon to change his fortunes.