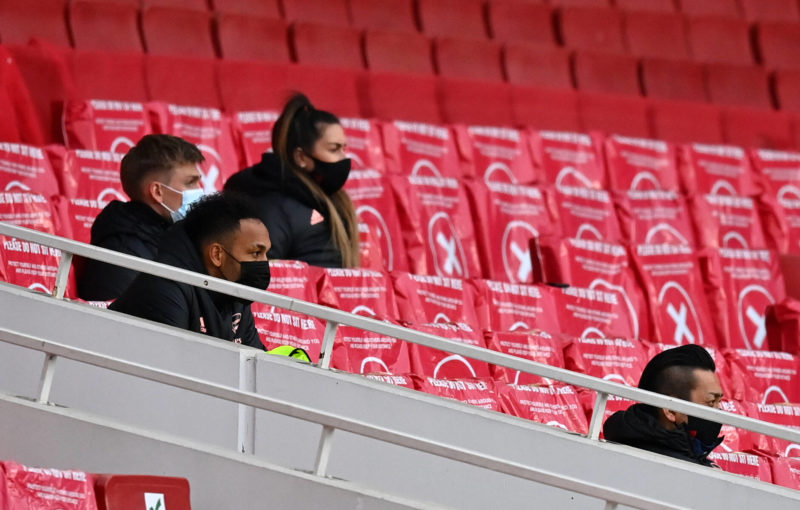 Pierre-Emerick Aubameyang will be fined by Arsenal after being dropped to the bench for being late.

As Arsenal announced their starting lineup for the game against Spurs, Pierre-Emerick Aubameyang was on the bench, a decision Mikel Arteta said was due to ‘disciplinary reasons’ which were revealed to be ‘lateness,’ and it’s reportedly not his first offence.

If anyone is wondering why Aubameyang was disciplined for being late for the match today, this is him stuck in traffic at 12.04 in Muswell Hill! #ARSTOT pic.twitter.com/T3TlF1SX8f

When Arsenal announced their starting lineup for the Premier League game against Tottenham at the Emirates and fans were left scratching their heads.

While it was good to see Emile Smith Rowe return to the starting lineup, and Willian return to the bench, all eyebrows were raised like a collective Carlo Ancelotti as to why Auba was on the bench.

Arteta (Auba) “He was going to start the match, we had disciplinary issue. We had drawn the line and we move on” pic.twitter.com/jD9N2aOAHk

As many others  pointed out on social media, it’s very strange to drop a player for disciplinary reasons but to also include him on the bench so lateness seemed to fit and the Athletic claimed it is not the first time it’s been an issue.

David Ornstein added, “Pierre-Emerick Aubameyang dropped to bench for Arsenal’s visit of Tottenham after captain reported late when squad met up earlier today. Believed not to be the first time & falls out of line with club’s matchday protocols.”

The media on Monday morning are now reporting that Auba will be fined in addition to missing out on Arsenal’s win over Spurs.

The Daily Mail report, “PIERRE-EMERICK AUBAMEYANG is set to be fined after turning up late when Arsenal’s squad met for the north London derby.

“Aubameyang was punished immediately by manager Mikel Arteta, who made the bold call to drop his captain for Arsenal’s clash with their biggest rivals Tottenham. The Gabon striker was an unused substitute at the Emirates and watched on as stand-in skipper Alexandre Lacazette scored Arsenal’s winner from the penalty spot in a 2-1 victory.

“And Aubameyang is facing a fine to go with his benching, following his breach of club rules, as this is not the first time he has been late.”

Arteta said after the game, “I made what I thought was the right decision.

“(Behavioural standards) is the foundation and the platform that we can build something medium and long term that is sustainable. That’s why I keep talking about it and acting on it.

“We have a way of living together that we have to respect each other and that’s it. But he ( Aubameyang) is an incredible guy, he’s probably one of the most important players in the team, he’s our captain. These things happen, we move forward. Let’s enjoy the victory.”