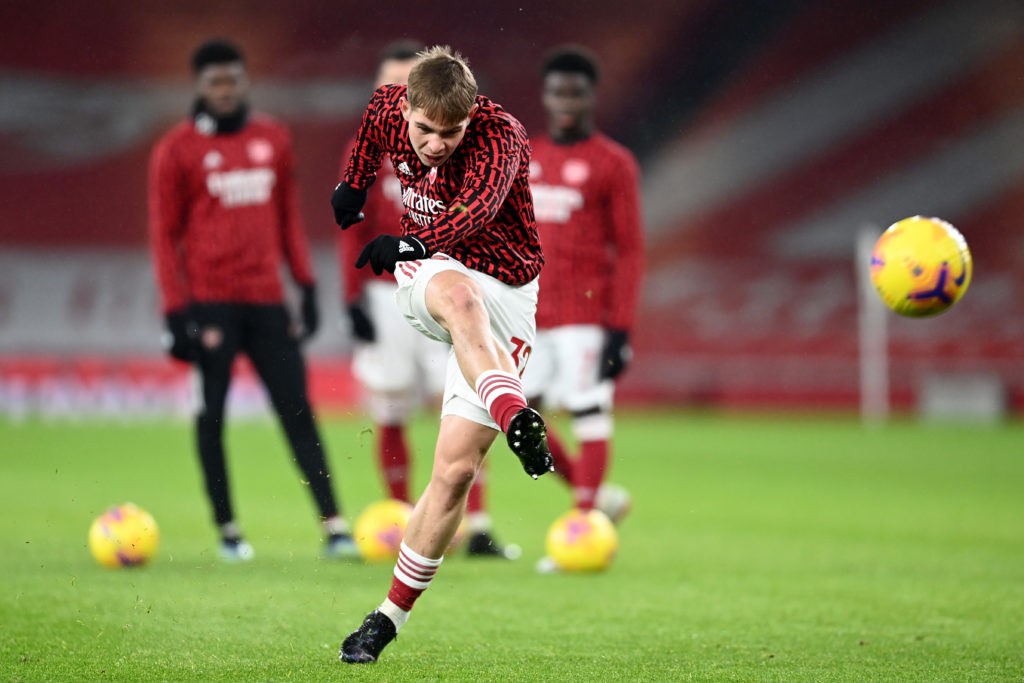 LONDON, ENGLAND: Emile Smith Rowe of Arsenal warms up prior to the Premier League match between Arsenal and Crystal Palace at Emirates Stadium on January 14, 2021. (Photo by Neil Hall – Pool/Getty Images)

Arsenal are looking to extend Emile Smith Rowe’s contract this summer, according to a report.

The Daily Mail report that amid a bit of a focus on young players in the upcoming summer window, Arsenal will look to extend Emile Smith Rowe’s contract. They’re also looking to tie down Folarin Balogun, as we know, and sign 20-year-old Tariq Lamptey.

Previous reports suggested Arsenal would offer Smith Rowe a wage increase from around £15k-a-week to £40k. There is reportedly confidence that the 20-year-old will commit his long-term future to the club.

Smith Rowe’s current contract expires in 2023, so this summer is the perfect time to hand him a new one.

The Daily Mail’s latest report highlights incoming head of football operations Richard Garlick’s desire to avoid ‘panic contracts’ in future, so ideally that means sorting out contract situations like these a bit earlier – whether by extending or selling.

There’s no doubt Arsenal will want to hold onto Smith Rowe beyond this summer. He’s made 20 first-team appearances this season despite only receiving his first league start under Mikel Arteta on Boxing Day. Clearly, he’s earned himself a key role in the team.

Arsenal will surely try and sign another midfielder, whether that’s Martin Odegaard joining permanently or someone else. But they’ll need Smith Rowe as an alternative at the very least, if not as someone to play alongside the new signing.