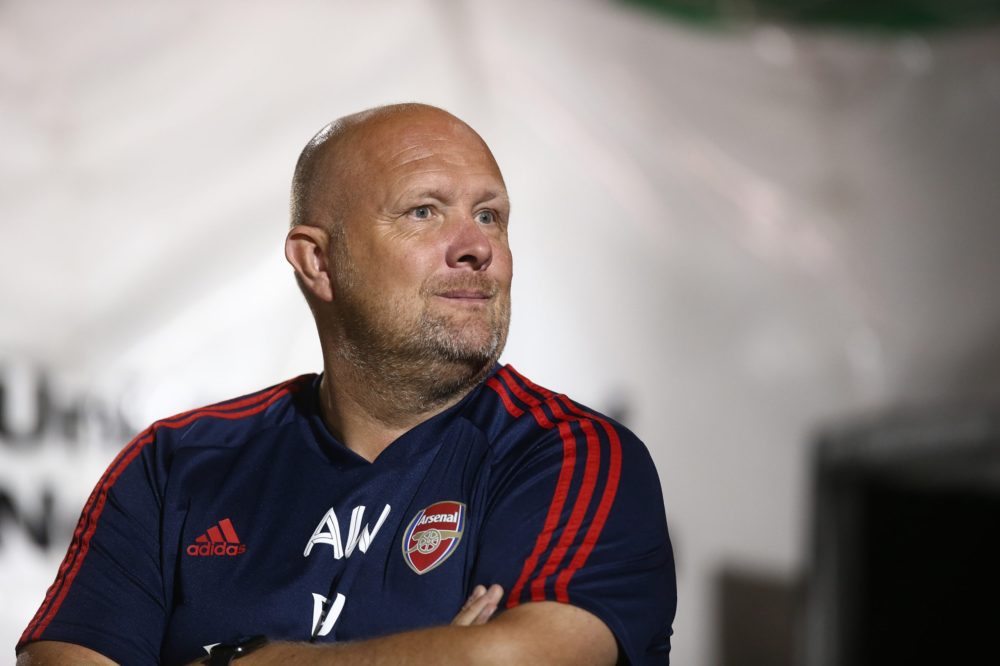 NORTHAMPTON, ENGLAND – AUGUST 27: Arsenal U21 goalkeeper coach Andy Woodman looks on during the Leasing.com Trophy match between Northampton Town and Arsenal U21 at PTS Academy Stadium on August 27, 2019 in Northampton, England. (Photo by Pete Norton/Getty Images)

Even though they are interested in signing Andy Woodman’s son, Arsenal have reportedly told their Head of Goalkeeping that he can leave the club in the summer after Bernd Leno complained about Mikel Arteta’s coach, Inaki Cana Pavon.

Andy Woodman is Arsenal’s head of goalkeeping but is out of contract in the summer. According to a report on Football Insider, Woodman was told in February that his Arsenal contract wouldn’t be renewed at the end of the current campaign. Their source informed them this was due to “the growing Spanish influence at the club and on the coaching staff.”

Woodman was put in charge of the goalkeeping department in 2018 when Gerry Peyton left the club. Inaki Cana Pavon then joined in 2019 and it seems his relationship with Mikel Arteta could be pivotal in the decisions being made.

It is now being claimed that the decision to let Woodman go was made after Bernd Leno complained about Pavon, asking for Woodman to be allowed to coach him. Their source said that the German keeper ‘does not rate’ Pavon.

Footballer Insider add, “Leno is believed to be a fan of Woodman’s methods and wanted to work with him on a daily basis.”

“Obviously at the end it will be me who makes the decision [who to buy]. But is very important that the people around me, who have on many occasions a much clearer criteria and specificity than me, that I really listen to them and try to follow what their feelings are.

“I have big faith in Inaki as I do with the rest of the staff that are here.”

Arsenal signed Cana from Brentford. He has previously worked for Barcelona’s academy and set up a goalkeeping academy of his own in Spain.

Cana was mainly responsible for Arsenal signing Alex Runarsson, recently sidelined with a knee injury much to the relief of Arsenal fans everywhere.

The coach worked with the keeper when they were both in Denmark and said in 2017 about Runarsson, “As soon as he arrived at the club I saw his potential.

“We must not forget that he is only 22 years old (he turned 26 in February 2021) and that he still has a lot of room for improvement, he is a goalkeeper who will have a great future.”

Cana certainly wasn’t wrong about that as Runarsson is now at Arsenal, with a five-year contract in his pocket despite looking severely out of his depth on the few occasions he’s been called upon.

Freddie Woodman, meanwhile, is Andy’s son and, while a Newcastle player, is currently on loan with Swansea. Arsenal were heavily linked with him during the January window and it is rumoured they are considering a move for him in the summer with Runarsson possibly on his way out of the club if Arsenal can find a buyer.

Woodman has kept 17 cleansheets in his 33 league games (and has conceded 24) while in total he has 18 cleansheets in 37 games (30 conceded) and we know Arsenal are looking to make changes this summer.

Whether that means signing Mat Ryan on a permanent deal or looking elsewhere, it remains to be seen.

Getting rid of Woodman’s dad, however, is unlikely to do much to help Arsenal’s case.